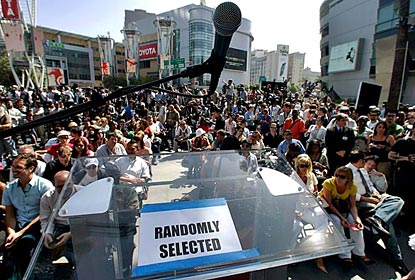 A record of 1.6 million people registered for a chance at 17,500 free tickets to Tuesday's memorial service for Michael Jackson at Staples Center.

Successful applicants will be notified by e-mail between 11 a.m. and 8 p.m. on 7/5/2009. Each of the 8,750 people selected will receive an exclusive code and instructions on how to obtain their two free tickets Monday.

Organizers of Michael Jackson's memorial service to be held at Staples Center said today they will give away 17,500 tickets to the event and will randomly draw names from those who sign up online to determine who gets to attend.

The service will be live-streamed on television and on the Internet, and there will be no funeral procession, organizers said at a news conference this morning at Staples Center in downtown Los Angeles.

Organizers will draw 8,750 names, and those people will receive two tickets each and wristbands on Monday. A total of 11,000 tickets will be for seats at Staples Center and 6,500 for seats at Nokia Theatre, where the live feed will be broadcast. People can register for the drawing at Staplescenter.com. No tickets will be sold to the event, organizers said.

City Councilwoman Jan Perry said fans would be better off staying home and watching the event on television.

No details were released on the content of the memorial service, but Jackson's brother Jermaine Jackson told CNN that it would include tributes from celebrities in the music industry.

Those whose names are drawn will be notified between 11 a.m. and 8 p.m. on Sunday and given the location where they should pick up their tickets Monday.

“There will be no distribution of tickets at Staples Center and L.A. Live,” said Tim Leiweke, president and chief executive officer of AEG, the company that owns and operates Staples Center and was producing Jackson's comeback concerts.

Los Angeles Police Department Asst. Chief Earl Paysinger said, “You must have a ticket to be admitted to the venue. There's no way to get to this venue if you don't have a ticket.”