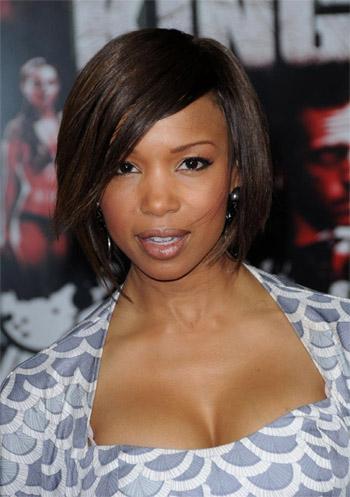 A Hollywood actress just revealed that the large majority of African American women in Hollywood have gotten plastic surgery. In an unusual move, actress and former 50 Cent sidekick Elise Neal just opened up about the prevalence of plastic surgery among black female celebrities. She also fesses up to having gone under the knife herself.

In a recent interview with Bossip, when asked about plastic surgery, Elise says:

“Being a person who’s had plastic surgery I think it’s personal choice. A lot of people make me laugh about the plastic surgery situation because I hate to say it but most African American females in entertainment have had some type of plastic surgery. Maybe it’s not breast enhancement but I’d say at least 75% of them have had their noses done and they cannot tell me that they haven’t. I’m sorry.”

Several romances ago, 42-year old Elise Neal had a relationship with rapper 50 Cent, aka, Curtis Jackson. The dancer and actress appeared in the 33-year old rapper’s “Follow My Lead” video. She has been in a few movies like Hustle & Flow and had several roles on TV shows like CSI, but she continues to dance and model, staying true to her roots.

Elise openly admits to having had a breast augmentation, saying:</p>

“I did my breast enhancement for me. But it didn’t have to do anything with acting. It had to do with being a performer. They were always hiring the girls who were more voluptuous.”

She adds, “I’ll be honest; I was insecure back from when I first started dancing. I felt like I always had to stuff (my costumes) to fit in and be in a chorus line with women who already had breast enhancement or who were naturally endowed. I wanted to be able to wear my [dance costumes] without someone telling me to stuff it. I’m not ashamed of it. People need to just own up to it.”