A Look at What’s Inside All Black Vogue Italia 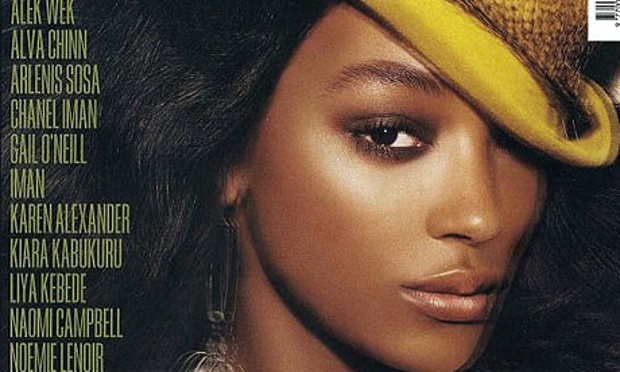 Everyone has been waiting patiently to see just what Vogue Italia has in store for their first ever “All Black Issue” and finally they are shedding a little light on what’s inside.

From left to right, the fold-out cover features Liya Kebede, Sessilee Lopez, Jourdan Dunn, and Naomi Campbell. Yes folks, Naomi Campbell. Despite all her negative media lately regarding her “bad attitude”, she is still a super model and one of a very chosen few.

For the July issue of Italian Vogue, Mr. Meisel has photographed only black models. In a reverse of the general pattern of fashion magazines, all the faces are black, and all the feature topics are related to black women in the arts and entertainment. Mr. Meisel was given roughly 100 pages for his pictures. The issue will be on European newsstands next Thursday and in the United States soon after.

Under its editor, Franca Sozzani, Italian Vogue has gained a reputation for being more about art and ideas than commerce. Ms. Sozzani also doesn’t mind controversy. 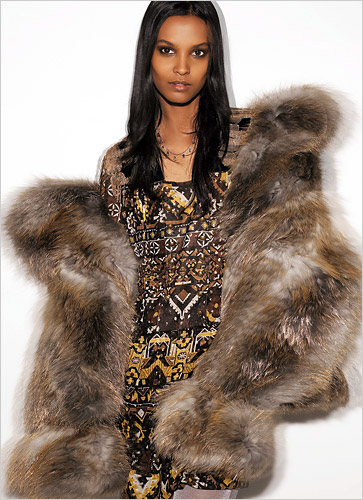 It’s amazing that Mr. Barack Obama isn’t even official yet, and he’s already opening doors for the black community.

Ms. Sozzani says that, as an Italian, she has been intrigued by the American presidential race and Mr. Obama, which was one source of inspiration when she and Mr. Meisel began discussing, in February, the idea of an all-black issue. Also, she was aware of the lack of diversity on the runways in recent years and the debate it fueled last fall in New York, where Bethann Hardison, a former model who ran a successful agency, held two panel discussions on the topic.

She also states that the issue was not a response to criticism that she, too, has under-represented blacks or portrayed them as stereotypes.

“Mine is not a magazine that can be accused of not using black girls,” said Ms. Sozzani, noting that Naomi Campbell has had several covers, and that Liya Kebede and Alek Wek have also had covers.

Having worked at one time with nearly all the models he chose for the black issue — Iman, Ms. Campbell, Tyra Banks, Jourdan Dunn, Ms. Kebede, Ms. Wek, Pat Cleveland, Karen Alexander — Mr. Meisel had his own feelings. “I thought, it’s ridiculous, this discrimination,” said Mr. Meisel, speaking by phone from his home in Los Angeles. “It’s so crazy to live in such a narrow, narrow place. Age, weight, sexuality, race — every kind of prejudice.”

He began casting in March. “I love the history of fashion, obviously, and I love old, and I tried to get as many of the older girls as I could,” he said. Over Ms. Sozzani’s initial objections, he also hired Toccara Jones, a full-figure model, who became known

from “America’s Next Top Model.” “I wanted to say something about weight, and I’m never allowed to do that,” he said. “I met Toccara and thought, she’s beautiful. What’s the deal with her? She’s great and she’s sexy.”

If these pictures have a heightened sense of glamour, it probably has something to do with the atmosphere of a Meisel shoot. According to Ms. Webb, “it’s the darkest studio, like a studio at MGM.”

There are fans and reflectors; many assistants. An area is marked “Hair” and another “Makeup.” (Pat McGrath did all the makeup for the issue, and Guido Palau did the hair.) A mirror is placed behind Mr. Meisel, so the model can see herself. 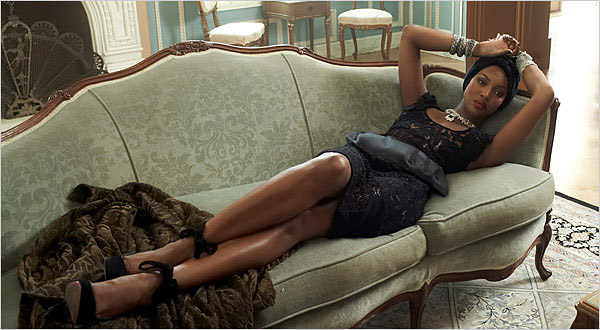 The four pictures that Ms. Campbell was supposed to make turned into 20. She also appears on the fold-out cover, along with Ms. Kebede, Sessilee Lopez and Ms. Dunn. “Franca doesn’t realize what she’s done for people of color,” Ms. Campbell said the other day. “It reminds me of Yves using all the black models.” She was referring to Yves Saint Laurent, who, like Gianni Versace and a handful of other designers, routinely cast minorities.