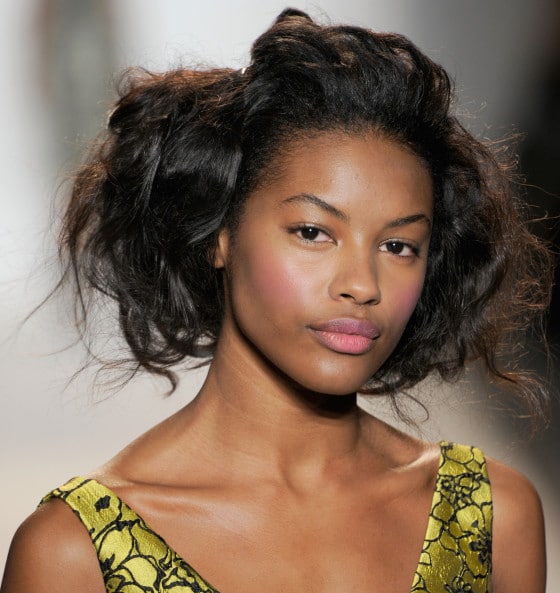 I’ve touched on the subject and my disappointment with Rushed Hairdo’s on The Runway During Fashion Week years ago, and it’s interesting to know that today the topic is still very relevant.

Fashion runway model, Leomie Anderson, recently expressed her frustrations via a tweet that emphasized the need for more backstage stylists who know how to work with African American hair and apply better makeup.

WE NEED MORE MAKEUP ARTISTS AND HAIR WHO ARE COMPETENT WITH ALL RACES BACKSTAGE AT SHOWS.

Teen Vogue magazine recently reached out to a few stylists who gave their analysis of what they have experienced with this ongoing issue.

Ursula Stephen, who works with Rihanna and Taraji P. Henson, says black models are often at a loss when it comes to backstage styling. “[This type of discrimination] is very common, and it happens in the editorial world as well,” says Ursula, who owns her own salon in Brooklyn. “I usually have to style all the African-American models when working backstage because the other stylists don’t know how to handle the hair, or the model is afraid from past experiences so they want me to do their hair.”

Dear white people in the fashion world! Please don't take this the wrong way but it's time you people get your shit right when it comes to our complexion! Why do I have to bring my own makeup to a professional show when all the other white girls don't have to do anything but show up wtf! Don't try to make me feel bad because I am blue black its 2015 go to Mac, Bobbi Brown, Makeup forever, Iman cosmetic, black opal, even Lancôme and Clinique carried them plus so much more. there's so much options our there for dark skin tones today. A good makeup artist would come prepare and do there research before coming to work because often time you know what to expect especially at a show! Stop apologizing it's insulting and disrespectful to me and my race it doesn't help, seriously! Make an effort at least! That goes for NYC, London, Milan, Paris and Cape Town plus everywhere else that have issues with black skin tones. Just because you only book a few of us doesn't mean you have the right to make us look ratchet. I'm tired of complaining about not getting book as a black model and I'm definitely super tired of apologizing for my blackness!!!! Fashion is art, art is never racist it should be inclusive of all not only white people, shit we started fashion in Africa and you modernize and copy it! Why can't we be part of fashion fully and equally?

Celebrity hairstylist Seto McCoy recounts having to console a model “nearly in tears” backstage at fashion week while an inadequate artist worked on her hair. “She was upset because it was her first show, and her hair looked nothing like the inspiration photo,” he recalled. “I asked if I could step in, and the hairstylist who was working with her seemed relieved. After styling that model, I was scouted by another black model who was originally prepped by a totally different artist. She wanted me to fix her look. There were several hairstylists there, and I was the only one capable of doing all types of hair.”

We can only hope that one day the industry starts to listen. We see what’s going on and we don’t like it one bit. It’s very ugly.