AMAZING: Ashanti Gives Back to Boys & Girls Clubs of America 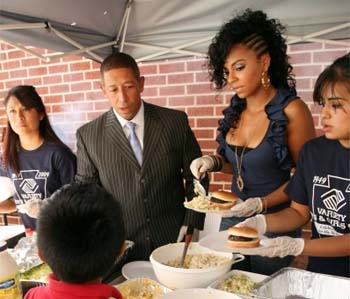 Singer Ashanti volunteered her services at The “Million Meal Summer” event for the Boys & Girls Clubs of America this past Friday August 28, 2009.

Earlier this month, Ashanti joined some 25 prominent alumni in the new advocacy campaign to help increase public awareness and understanding about the key issues facing America’s youth, and the positive impact of Clubs.

As a mother of two young men who both grew up with The Boys & Girls Club of America, and were involved with many of their wonderful programs that kept them off the streets, and helped them to realize that education was a priority – I love to see that the Clubs are still going strong and have so much support.

From academic failure and gang violence to poverty, drugs and obesity, America’s young people face a daunting array of problems – with serious consequences and fewer safety nets at home and in the community.

According to a 2007 BGCA alumni survey conducted by Harris Interactive, 57 percent of alumni reported, “The Club saved my life,” while another 28 percent credited Boys & Girls Clubs with keeping them in school.

“Growing up in the Club gave me the opportunity to explore many interests and talents, including dancing and singing, that have profoundly influenced my life,” said Ashanti. “The adult staff at the Club in Glen Cove challenged us to excel, and instilled positive values that still influence me as an adult. It’s an honor to join our alumni ambassadors in talking about the impact Boys & Girls Clubs have on young people, because I’m one of them.” 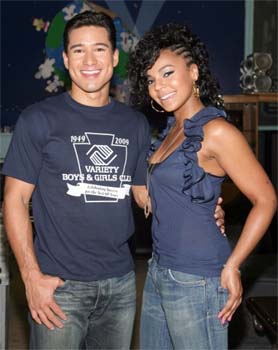 “We are very excited about Ashanti joining the BE GREAT campaign, and her willingness to help us impact the lives of the young people who need us most,” said BGCA President and CEO Roxanne Spillett. “Her story is a textbook case of how the Boys & Girls Club experience can help shape a life, and we are so proud of all that she has accomplished, and all she will continue to do on behalf of the young people following in her footsteps.”

Ashanti will collaborate with BGCA and other alumni to urge the country’s political and business leaders to make the young people of America a priority and encourage every citizen to make a difference by supporting organizations such as Boys & Girls Clubs – ensuring that every child has a safe, supervised and structured environment during the critical after-school hours.