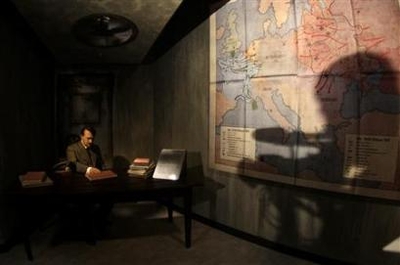 Just minutes after the museum opened, the 41-year-old German man pushed aside two security men guarding the figure before ripping off the head in protest at the exhibit, a police spokesman said. The police were alerted and arrested the man.

The waxwork figure of a glum-looking Adolf Hitler in a mock bunker during the last days of his life was criticized as being in bad taste. A media preview of the new branch of Madame Tussauds Thursday was overshadowed by a row over the exhibit.

Critics said it was inappropriate to display the Nazi dictator, who started World War Two and ordered the extermination of Europe's Jews, in a museum alongside celebrities, pop stars, world statesmen and sporting heroes.

Dressed in a grey suit, the figure of Hitler gazed downwards with a despondent stare, his arm outstretched on a large wooden table with a map of Europe on the wall of his gloomy bunker.

About 25 workers spent about four months on the waxwork, using more than 2,000 pictures and pieces of archive material and also guided by a model of the “Fuehrer” in the London branch of Madame Tussauds where he is standing upright.

It is illegal in Germany to show Nazi symbols and art glorifying Hitler and the exhibit was cordoned off to stop visitors posing with him.

Unobtrusive signs asked visitors to refrain from taking photos or posing with Hitler “out of respect for the millions of people who died during World War Two.” Camera surveillance and museum officials were meant to stop inappropriate behavior.

Institutions such as the foundation for Germany's central Holocaust memorial site condemned the idea of the exhibit as tasteless, saying it had been included to generate business.

The wax figure is the latest in a gradual breaking down of taboos about Hitler in Germany more than 60 years after the end of the war and the Holocaust in which some six million Jews were killed.

The 2004 film “Downfall” provoked controversy as it portrayed the leader in a human light during the last days of his life and last year a satire about Hitler by Swiss-born Jewish director Dani Levy was released in Germany.