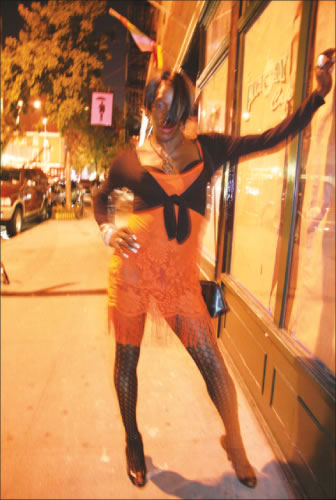 With all the buzz about Isis Tsunami who may or may not be Americas Next Top Model, here’s a story that I found on thevillager.com too good to be ignored.

SOMEBODY CALL THE FASHION POLICE

“You’re either going to hook me up with some fun, or hook me up in cuffs,” he said, licking his lips and kneading his pants.

Alexis Lbajela, who has been sashaying on the Christopher St. sidewalks for 20 years, recently sported an orange lace Giorgio Armani dress, with a black shawl and garters.

In the West Village on a recent late night/early morning, long, straight black hair, pushed back with Dolce & Gabbana sunglasses, framed her face. It matched her “devil” bag: a black leather purse with spikes around the strap, one small remnant from her gothic period.

Thirty blocks south of Fashion Ave., Christopher St. is the runway for transgender divas strutting down sidewalks blowing kisses and hollering at each other, “Hey Sexy, I like what you wearing.” Fashion is their social lubricant and how they embrace female glamour — it’s their key to beauty, self-esteem and money.

Over the years a mood ring has followed Rachel’s style, from when she was angry and dressed “like a complete zombie,” before a 16-month admittance to an Upstate asylum, to her current classy look. The sophistication that she achieves without lace, glitter or makeup is reminiscent of what one might wear on a movie date.

“Everyone has a sense of style,” she said. “It’s like a Britney Spears thing: She pops on that pink wig and goes crazy.’’

“I would describe it as ‘Take me,’” Rachel said.

Jeans and capri pants are her top choices for leg wear, because she said that skirts make her thighs rub together.

But one transgender woman, in a turquoise dress so short that her behind was exposed, let no chafing interrupt her freak dance later that night. She grinded between the outstretched legs of a man sitting on a Christopher St. stoop between Hudson and Greenwich Sts., as he held onto the back of her hips like a steering wheel. He stared at her soft, round butt twisting under the steady yellow streetlight.

Tight dresses that show off curves achieved with hormones are popular apparel in the transgender night scene. Alexis Lbajela has been sashaying her way down Christopher St. for 20 years in different one-piece outfits. Recently, she wore an orange lace Giorgio Armani dress, with a black shawl and garters.

Unfortunately, the loose knit of the floral lace, and the long tassels at the hemline gave her the appearance of an ornamental mat: Doily chic. A black bustier bra also tackily peeked an inch and a half above her neckline.

“It keeps your breasts firmer,” Lbajela said, long black bangs falling in front of her face. She wore a simple necklace with a pendant the shape of the number 8 on a chain, which she said was an up-to-date style. Bangle bracelets dangled on her wrists just inches above long nails, neatly filed into square tips.

In her hands she daintily carried her shoes, complaining that the high heels were hurting her feet when she walked.

She does not suffer alone. Carey Smith, 26, from Brooklyn, stumbled down Christopher St. a few nights later, holding sparkling gold, 3-inch heels that she said a friend bought her for $600.

Smith looked like a tomboy fallen into a basket of laundry. She wore a red sleeveless dress that tied around her neck and showed off her lean, muscular arms, but she also sported a black corset-style belt that jarred the sleek red fabric. It made the material bunch up below her chest to resemble breasts she didn’t have and probably would have looked gorgeous without simulating, like a female athlete who makes up for lack of curves with the attraction of a strong, healthy body.

With her hands on her hips meeting her long mane of straight glossy black hair, and batting long fake eyelashes, Smith said, “During the day I wear jeans and a T-shirt because I like to be discreet, but at night I wear tight clothing because I like to be sexy and I love being a woman.”

Then Smith hopped off the cement into the vestibule of an apartment building.

“My feet hurt,” she said. “I’m going to get another pair of shoes from a friend.”

While shoes may also pain the feet of males and females, underwear can present unique problems for pre-operation transgender women. They want foxy little numbers, but still need to cover bulging male genitalia.

Rachel has a drawer full of underwear, varying in color from black to silver with rainbow stars, but mostly of booty style to sufficiently cover her most private areas. Her underwear is still visible through her white cotton pants.

“My friends say my sense of style is bitch,” she said, with barbell-style piercing jewelry glinting as her tongue flicked inside her mouth. continue reading