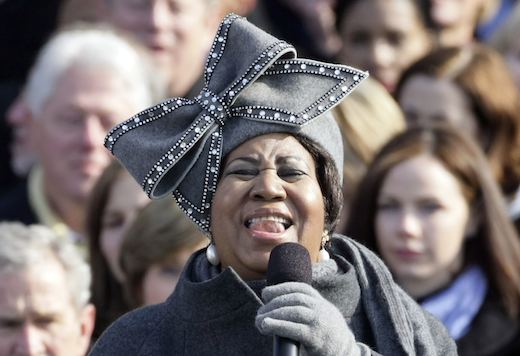 Starting minutes after Franklin finished her distinctive rendition of “My Country, ‘Tis of Thee” on Tuesday, the store’s phones started ringing.

By Wednesday afternoon, Mr. Song had sold hundreds of hats. A store in Dallas had sold 500 more, and the material was running out.

“People are calling from England, asking for the hat,” said Luke Song, who designed Franklin’s chapeau. “I’m shocked. I had no idea. We did not expect this.”

The hat has gone crazy in the media and cyberspace. Everyone from Jon Stewart on “The Daily Show” to the women on “The View” talked about it Tuesday and Wednesday. Stewart poked fun at it; the women seemed more appreciative. On Wednesday’s “The Ellen Show,” host Ellen DeGeneres wore an exaggerated hat similar to Franklin’s.

People have created dozens of Web sites devoted to the hat and have placed it on mug shots of Dick Cheney, assorted dogs and the heads of Mt. Rushmore, among many others.

On the Los Angeles Times blog page Wednesday, a poster named Sarah Hart wrote: “Loved that hat! She is the Queen and she rocked that hat and made that old staid anthem new and powerful!”

Song said Franklin, a longtime customer, came to him and wanted something to go with a coat she had picked out for the inauguration of President Barack Obama.

“She had in mind what she wanted,” Song said. “She said, ‘I want it altered this way.’ That’s what we do most of the time with the client. We meet them halfway.”

The heather-gray hat was done in wool felt. The sparkly things are Swarovski crystals.

The hat Song was selling to customers Wednesday is not the custom hat Franklin wore, but it’s very close.

Song, 36, of Southfield chatted Wednesday and took calls from around the globe, surrounded by about 1,000 vibrantly colored hats in the store, which sits on a stretch of Woodward that has evolved into a funky avenue of fashion. Next door on one side is an abandoned store. On the other side is the Praise Him Beauty, Barber and Nail Salon.

The hat store was started in 1982 by Song’s mother, Jin, an immigrant from South Korea. Luke Song, who graduated from Birmingham Seaholm High School and Parsons the New School for Design in New York, is the designer.

Business was good before the hat appeared on one of the most-watched spectacles in recent years. But now, Franklin’s flamboyant headpiece has “taken on a life of its own.”