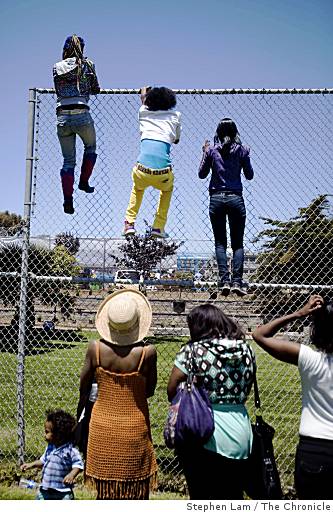 Who knew Michelle Obama was coming to San Francisco to help an Elementary School build a playground?

From The SF Chronicle:  San Francisco Supervisor Sophie Maxwell and other African American leaders in the San Francisco Bayview are not at all happy about how this week's visit by first lady Michelle Obama was handled.

“One look at the picture on the front of The Chronicle says it all,” Maxwell said. “The people in the neighborhood had to climb fences to even get a look at what was going on.”

“The people I have talked with felt very disengaged and somewhat offended,” Maxwell said.

At issue was the planning – or lack thereof – for the first lady's visit to Bret Harte Elementary School, where she, California first lady Maria Shriver and about 500 volunteers in orange T-shirts began building a playground Monday.

“All these people supposedly doing something for (neighborhood residents), and they didn't know anything about it,” Maxwell said.

Not so, said Jackie Williams a longtime Bayview gardening and youth program activist who worked at the event.

Williams, who learned only Sunday that Obama was coming, said the call went out weeks ago for volunteers to help with the playground construction. That's when she signed up.

“They knew about it, honey,” Williams said. “They just didn't know the president's wife was going to be the there.”

In other words — If people would put a little more time into trying to help build a much safer and better community in their community they would be surprised to actually see some of the good that come from it — and climbing the fence (which by the way is totally unacceptable) wouldn't even be an issue.