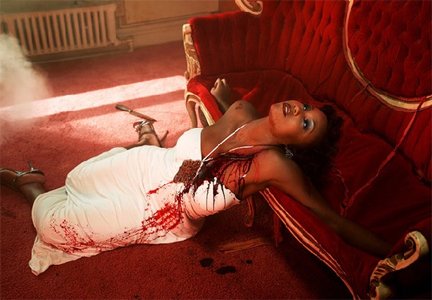 UNBELIEVEABLE how 1000's of women have literally spent the night in line desperately waiting to audition for a show that will only select 12 contestants.  Keep in mind casting in several cities and states are still under way. [just look at this sh%!]

Talk about following dreams and doing so by any means necessary.  During hard times such as these, however, I'm wondering if I should be surprised.  SMH

Six women received medical treatment on Saturday and three people were arrested after what local radio described as a stampede as thousands waited in New York to audition for the reality show “America's Next Top Model.”

A New York Police Department official said two women and a man were arrested on charges of inciting to riot and disorderly conduct.

WINS radio reported that chaos erupted outside a midtown Manhattan hotel after a car belching smoke pulled up near the line of women late in the afternoon, leading to a cry of “fire” that sparked panic. Witnesses told the station the situation was compounded when a man leapt from a car and began grabbing women's purses.

The police spokesman could not confirm the details of the radio report. Police said six women in the crowd were treated after complaining of feeling faint. Some of the women had lined up all night to audition for the show that airs on the CW network and stars former model Tyra Banks.

Sidewalks were littered with chairs and sleeping bags from those who waited overnight, as well as clothes and shoes abandoned in the rush of screaming women, radio reported. source