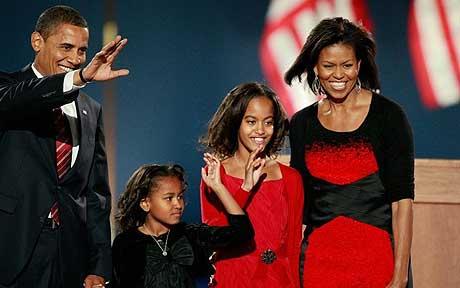 “Mr President-elect, congratulations to you. What an awesome night for you, your family and your supporters. Laura and I called to congratulate you and your good bride,” Dana Perino quoted Mr Bush as telling Mr Obama.

“I promise to make this a smooth transition. You are about to go on one of the great journeys of life. Congratulations and go enjoy yourself,” he said.

The president also invited Mr Obama and his wife and daughters “to visit the White House soon, at their convenience,” Ms Perino said.

Mr Bush, who is expected to make a public statement on the outcome of the 2008 vote at 10:40 am (1540 GMT) on Wednesday, also reached out to defeated Republican John McCain.

“John, you gave it your all. I'm proud of you, and I'm sorry it didn't work out. You didn't leave anything on the playing field,” Ms Perino quoted the Republican president as telling the Arizona senator.

THE CROWD CHEERS FOR OBAMA LIKE IT'S A BRAND NEW YEAR