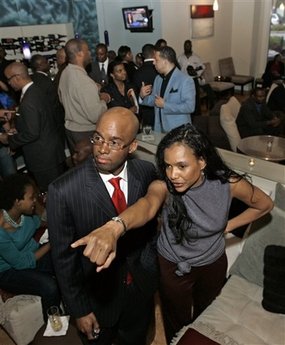 Maggie and John Anderson of Chicago vowed four months ago that for one year, they would try to patronize only black-owned businesses. “The Ebony Experiment” is the reason John had to suffer for hours with a stomach ache and Maggie no longer gets that brand-name lather when she washes her hair. A grocery trip is a 14-mile odyssey.

“We kind of enjoy the sacrifice because we get to make the point … but I am going without stuff and I am frustrated on a daily basis,” Maggie Anderson said. “It's like, my people have been here 400 years and we don't even have a Walgreen's to show for it.”

So far, the Anderson's have spent thousands of dollars with black businesses from grocery stores to dry cleaners. But the couple still hasn't found a mortgage lender, home security system vendor or toy store. Nonetheless, they're hoping to expand the endeavor beyond their Chicago home.

Plans are under way to track spending among supporters nationwide and build a national database of quality black businesses. The first affiliate chapter has been launched in Atlanta, and the couple has established a foundation to raise funds for black businesses and an annual convention.

“We have the real power to do something, to use the money we spend every day to solve our problems,” Maggie Anderson said recently at a meet-and-greet in Atlanta. “We have to believe that black businesses are just as good as everybody else's.”

Now, the Andersons are following up with 4,000 people who signed up for the experiment on their website to gauge their commitment and set up online accounts to track their spending. Hundreds have also joined the experiment's Facebook page, Maggie Anderson said.

The Andersons remain encouraged by their momentum online and in the media. At the end of 2009, they hope to show $1 million in spending with black businesses among supporters across the country.

“The response has been so huge,” Maggie Anderson said. “We think so much can come out of this. We're in movement-making mode now.” source