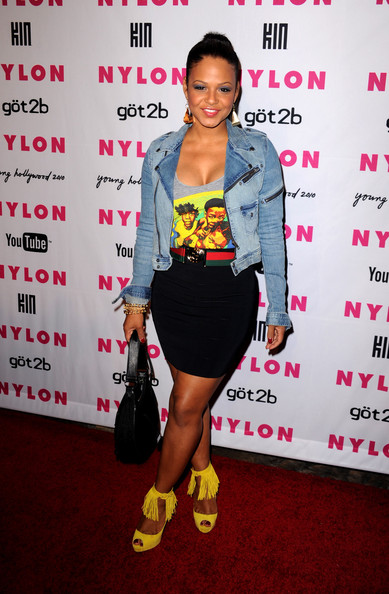 Actress Christina Milian arrived at the NYLON & YouTube Young Hollywood Party at the Roosevelt Hotel in Hollywood, CA on May 12, 2010. As a new mom with a loving heart, it appears Milian had the suffering kids in Haiti on her mind. She was photo’d at the event wearing a charitable Haiti t-shirt by OBEY (The Haiti Triblend Tank), paired with an Afrocentric Gucci belt and yellow Christian Louboutin Short Tina Fringe sandals.

According to the Associated Press, the catastrophic earthquake that left at least 1.3 million of Haiti’s 9 million people homeless has driven desperate parents to abandon their children in the most bizzarre places in the hope that rescue organizations will offer them a better life.

A 4-day-old baby girl was left in a cardboard box outside a hospital. Toddlers are being found alone in hospital waiting rooms. Outside a private clinic, volunteers discovered a 3-year-old holding a bag of carefully-folded underwear. A note pinned to his shirt asked those who found him to look after him.