Choke On This: Home Grown Marijuana Florida vs. California 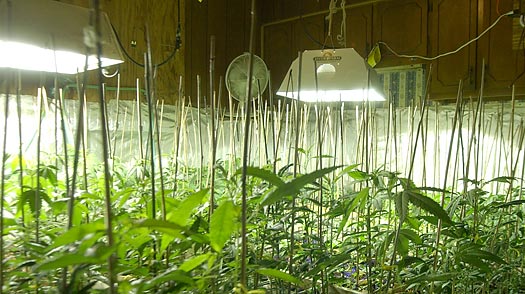 According to TIME, California may be the center of the marijuana trade and the controversies over its legalization. But Florida has surpassed it in one important category: the Sunshine State is now the country's leader in indoor marijuana cultivation. It is a potent distinction because most of the marijuana grown this way is cultured hydroponically — that is, mostly without soil and with a carefully calibrated cocktail of chemicals and lighting — to create some of the highest level of highs on the market.

Miami Police Major Charles Nanney says informants played a crucial role in the success of a statewide crackdown in June that resulted in the seizure of 6,828 marijuana plants and 120 residential marijuana labs over the course of a few days. Among the best tipsters, they say, are electricians paid big money by growers to wire the sophisticated network of lights and air conditioners used to cool plants and subject them to round-the-clock illumination. The energy-chugging networks require an expert's touch to bypass the electric meter and tap straight into the grid. A sharp increase in electricity used to be a telltale sign of a grow house. Some growers have caught on, however, and are learning to mask their energy profile.