Thousands of family, friends and fans turned out for one last show from their hero, rap legend Nate Dogg, who was laid to rest in his hometown of Long Beach on March 26.

Inside the Long Beach Cruise Terminal, lights shined down on the wooden coffin adorned with red and white flowers. Two jumbo screens on opposite sides of his casket flashed six different photos of the singer from a childhood boy, when he was known to family as “Buddy,” to the platinum singer known to the world as Nate Dogg. 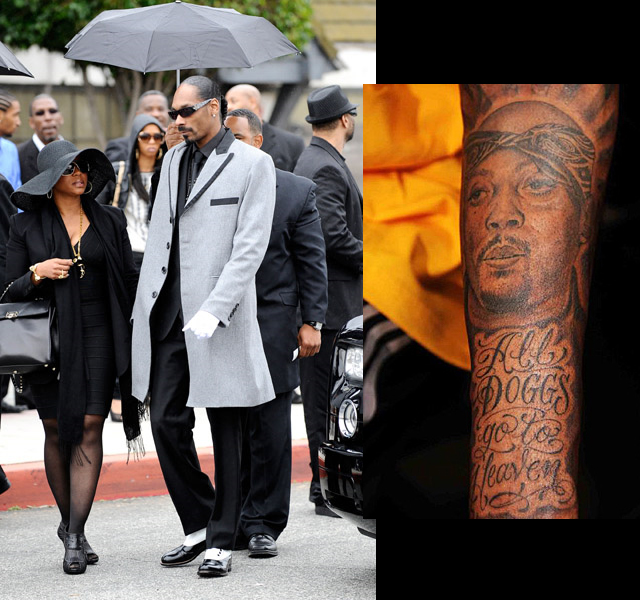 “He was a loving caring individual,” said Snoop, who tattooed a sleeve of Nate on his arm, with the phrase “All Doggs go to Heaven” the day before the funeral service. “If you listen to his music, he took church melodies and flipped it with hip-hop. I'm so honored, so happy that you gave me the opportunity, God, to know Nate Dogg. I want to stand here and cry, but I have to have the strength for you Nate Dogg. It's 213, DPG for life.”
“He fought a hard fight,” said Nate's manager, Rod McGrew. He also thanked Dr. Dre and Eminem, in addition to Snoop, Warren G and Xzibit, for assisting the family in getting through the past several days. “The last three years were unbelievable. He didn't give up. He just had a talk with God and gave up. Two hours before that he was fine.”

McGrew said that with Nate's passing, the singer's three wishes will now be granted. “He wanted to go to heaven and hang with his boys,” McGrew said. “He loved Tupac. He recorded with him. He wanted to hang with Biggie. But the most important thing is that he can walk around heaven with his favorite artist of all time, Michael Jackson.”