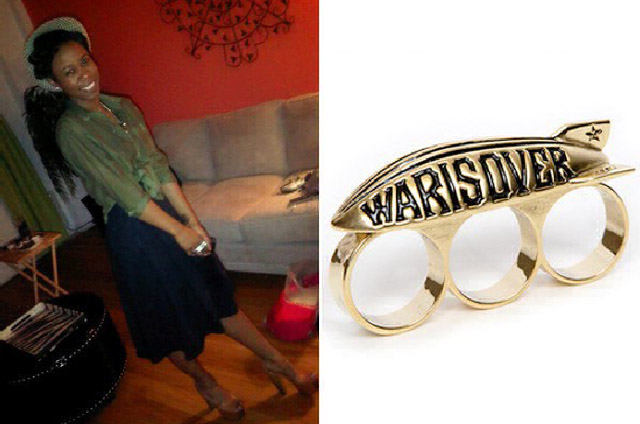 Passing through airport security these days seems to require walking through butt naked without any flaws, as any indication of indifference (including excessive stretch marks) is subject to raise eyebrows and land you in the slammer.

Tatiana Johnson, an inspired journalist tells her story (via Refinery 29) on how wearing a three-finger ring designed by Shepard Fairey to the airport earned her a charge of criminal possession of a weapon and a one-way ticket to jail.

“On what seemed like a great day for two best friends to fly home to Tennessee, I ended up a jail cell. It was about 9:45 a.m., and I was cheerful and excited about my quick visit home to see my family. Originally from New York, I came back after college to build my name in the music, fashion, and journalism world (looks like I’m well on my way now). I don’t like wearing too much jewelry at the airport because of the metal detectors, so I usually wear earrings and my favorite ring. On May 18, 2011, I was told to take off my shoes, hooded college radio sweatshirt, and jewelry, and put them on the conveyor belt as usual. I did that and walked through the metal detector. Next thing you know, they were asking if the items belonged to me. I said yes. They said I had to wait for a supervisor and I asked why. I was told by the TSA employee that my ring looks like a ‘weapon.’ I looked at him and said I don’t understand, ‘I wear this ring all the time and can ensure that it’s not a weapon.’ He told me not to worry and someone would be right over so that my friend and I could make our flight. As we waited not only did one other TSA employee come over, but two more. Then I was told to show my identification and plane ticket. I did as I was told and asked what the problem was, and told them my flight was leaving in an hour. They then told me a police officer would have to come over and check the ring. I said ‘if it’s going to be that much trouble you can throw it away…I just want to make my flight home. ‘