Do People Confuse the Terms Submit and Obey in Marriage? 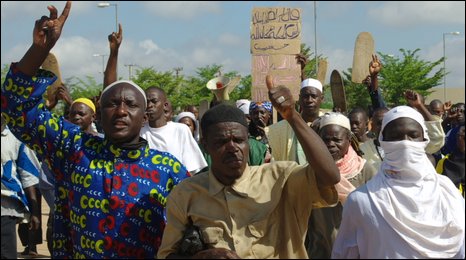 Tens of thousands of people in Mali's capital, Bamako, have been protesting against a new law which gives women equal rights in marriage.

The law, which passed earlier this month, also strengthens inheritance rights for women and children born out of wedlock.

The law was adopted by the Malian parliament at the beginning of August, and has yet to be signed into force by the president.

One of the most contentious issues in the new legislation is that women are no longer required to “obey” their husbands.

“We have to stick to the Koran,” Ms Dembele told the BBC's Focus on Africa program. “A man must protect his wife, a wife must obey her husband.”

“It's a tiny minority of women here that wants this new law – the intellectuals. The poor and illiterate women of this country – the real Muslims – are against it,” she added.

I usually don't speak on things I don't know much about which is why I tend to sway away from my feelings towards the Islamic religion and their many beliefs – but right off the top I have questions regarding the use of the word obey.

I'm not so sure about how things are worded in the Koran, and many would argue that the bible itself says a woman is suppose to obey her husband, although research finds that the actual term used is submit, not obey.  This brings about the question, what is the difference between submit and obey?

It's my understanding that to submit to someone is to give yourself freely to that person (by choice), and to obey someone is to follow a list of their every command.

A woman can submit herself to a man and do the things she's suppose to do without being told, such as respect her husband and support him with his decisions while he protects and provides for the family.  But to obey a man's every command would make a woman unworthy of being a human being with her own common sense.

I find it interesting that the intellectuals are the ones that are for this new law, while the poor and the illiterate are against it.