While no-one can say they didn't see a major riot coming between angry protestors and police, they probably didn't expect it to happen so soon. But, when Mark Duggan, 29, an alleged gangster, was fatally gunned down by London police last Thursday, angry protesters began to prepare themselves for war. 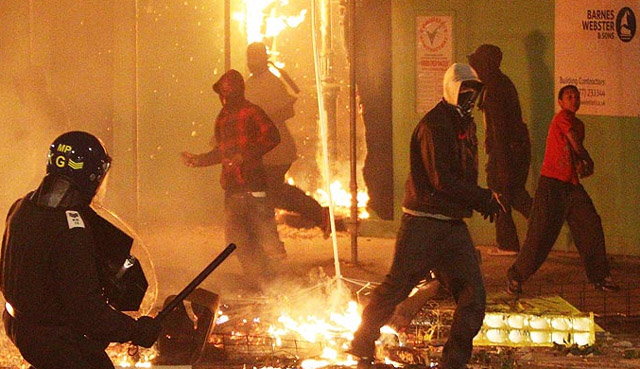 According to several reports, it all began when Duggan was riding in a cab that was pulled over by Operation Trident, a unit of the London Police Department that monitors the city’s Black neighborhoods.

Police versions of the fatal shooting, claim Duggan was shot after firing at a cop, who was saved by the bullet, which hit his radio. However, tests on a bullet lodged in the radio are said to show it was not from the handgun Duggan was carrying. Instead, witnesses argue, police shot Duggan repeatedly in the head while he was face down execution style.

Things heated up early Saturday morning (Aug. 6), when Duggan's family and over 100 protesters went to the Tottenham Police Department demanding answers. Two hours later, several youths began looting, rioting, and vandalizing public property in the area. Since then, the rioting has spread to several cities throughout London, and some say kids as young as seven or eight were taking part in the ongoing mayhem.

Many angry residents and business people are not pleased with the way protestors are handling the situation. David Lammy, a resident of Tottenham, says it's heartbreaking. “A community that was already hurting has now had its heart ripped out. The post office, shops, newsagents, the council building that deals with customer complaints, were smashed to pieces by mindless, mindless people, many of whom had come from afar intent on trouble.” As he spoke some onlookers cried: “The police want to see the place burn.”

Authorities are now threatening to prosecute persons on the social networking site Twitter for enticing the continued violence.