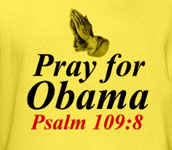 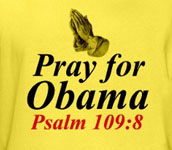 Don’t Be The Fool That Know Not What Thy Weareth…

At first glance, you might think ohhhh that’s a nice slogan, considering our president, Barack Obama, really does need prayers for his sanity and his safety with all the hate that surrounds him. But when you learn of the meaning behind the message, which in this case, is (a secret christian code for kill the president), you can’t help but wonder what kind of individual who claims to believe in God would go so far out their way to try to make a decent man out to be the devil?

According to Gawker, posters to various message boards tell stories of seeing bumper stickers with the message, “Pray for Obama Psalm 109:8” on the highway, only to look up the verse and find, “Let his days be few; and let another take his office.”

T-Shirts were later created and were being sold on the cafe express website, but have since been removed.

For those who may not aware, Psalm 109 is known as “A Cry for Vengeance,” which is one of the foundational values of Christianity, and can be read in its entirety here.

The only part I find humorous about this joke is the part of Psalm 109 verse 29 that reads, “Let mine adversaries be clothed with shame; and let them cover themselves with their own confusion, as with a mantle.”