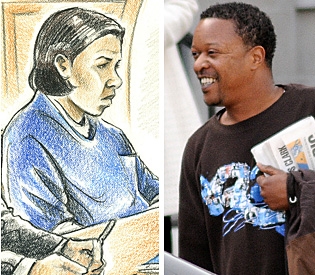 A former boss and boyfriend of the Canton call girl convicted of shaking down a mysterious business big shot for $280,000 is “shocked” the “clean-cut” woman he knew was caught up in top-secret sexcapades.

“She’s a good kid – a very good kid. Clean-cut, hardworking, the college type,” Paul Jones, 44, told the Herald yesterday outside Stoughton District Court, where he is fighting eviction proceedings based on what he argues is an invalid foreclosure on his mortgage.

Jones’ ex-lover Michelle Robinson, 29, is currently under house arrest – and forbidden from naming her deep-pocketed john – after pleading guilty in federal court to extorting the well-connected bigwig.

Jones, his 572 Park St. address in Stoughton, and the GMC Envoy he drove away from court yesterday all are linked by public records to Absoloot Enterprises.

In addition, the plate on Jones’ SUV is registered to Absoloot Enterprises.

Jones said Robinson was an “employee” of either his general contracting firm or his record label. He declined comment when asked if he runs an escort service.

Robinson met the unnamed, married, 60-something businessman in December 2007 through an escort service not identified in court records. He ended their pay-for-play affair in June.

In July, Robinson began demanding the john pay up to stop her from selling her story to a male “reporter” for $1 million. The john’s $280,000 hush payout was never recovered.

Jones said he doesn’t know who the john is and is not involved in Robinson’s case.

“Sweetheart,” he said, “do you think for one minute a black man could be tied to something like this and not get dragged into court?”

Jones said he was interested in doing an article on Robinson’s plight for a hip-hop magazine he has started up under a multimedia company, Looters, he formed Sept. 2, less than a month after Robinson’s Aug. 13 arrest by the FBI.

Jones said he and Robinson parted on “friendly terms,” but it wasn’t always so.

Jones was arrested Oct. 31, 2005, for hitting, choking and bashing Robinson in the head with a paint can, then kicking her down a staircase at 572 Park St. for accusing him of stealing $7,800 from her checking account. In 2006, the Norfolk District Attorney’s Office dismissed assault charges against Jones after Robinson refused to cooperate.