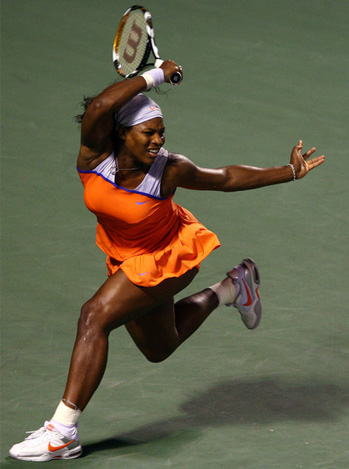 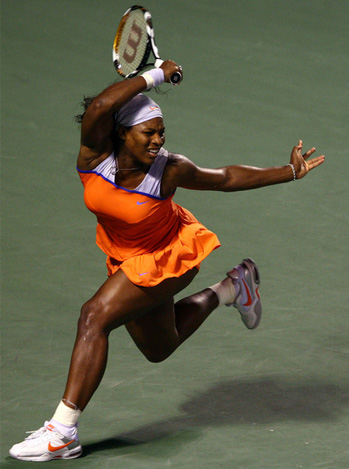 Now I have to admit that I’m not a big fan of Serena Williams’ muscular physique — it’s just not my ideal of being feminine.

But I do understand that by Serena being a pro athlete — her workouts leave her no choice but to have enhanced muscular features, especially in her arms.

There’s really no way around it — big or small Serena is destined to be solid as a rock.

What I don’t understand — is how an unhealthy, fat black man can sit and go in so hard on Serena’s appearance and boldly suggest that because of her large frame and bad eating habits, Williams is not as good as she could be.

It doesn’t take a follower of any particular sport to realize that what Whitlock is saying in regards to Serena’s “physical appearance” only shows that he’s just a pig that clearly doesn’t know the beauty of black women. It’s a fact that big butts and large frames are “natural” physical characteristics.

“God gave Serena everything, including drop-dead looks, says Whitlock. “She’s chosen to smother some of it in an unsightly layer of thick, muscled blubber, a byproduct of her unwillingness to commit to a training regimen and diet that would have her at the top of her game year-round.”

Interesting observation coming from someone who appears to be a couch potato… a “plump and lazy” one at that.

The funny part is that he asks people to think about it…… “at 5-foot-9, 145 pounds, Serena would be unstoppable on the court, on the cover of every magazine still in circulation and downloaded on the Internet three times more often than Anna Kournikova.

“Instead, Serena is arguably pushing 175 pounds, content playing hard only in the major tournaments, happy to be photographed on dates with pro athletes and proud to serve as a role model for women with oversized back packs.”

“With a reduction in glut, a little less butt and a smidgen more guts, Serena Williams would easily be as big as Michael Jackson, dwarf Tiger Woods and take a run at Rosa Parks.
“She’d rather eat, half-ass her way through non-major tournaments and complain she’s not getting the respect her 11-major-championships résumé demands.

“She complains about being ranked No. 2 in the world when she’s not bitching on Twitter or her blog about new rules that forbid Wimbledon players from eating in the locker room.

“Seriously, how else can Serena fill out her size 16 shorts without grazing at her stall between matches? … read more