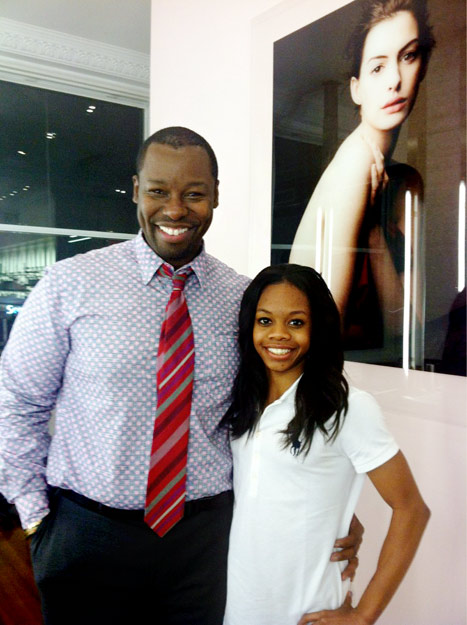 It really is a shame that Gabrielle ‘Gabby’ Douglas had to share her dream come true of being in London for the Olympics, with a part of the public who had issues with her hair. But, celebrity stylist Ted Gibson is having an ‘aha moment‘ with the special opportunity to change the hair conversation from bad to good.

“I couldn’t believe it and still can’t,” Gibson, who has worked on the tresses of Anne Hathaway, Angelina Jolie, Kate Gosselin and Ashley Greene, told The Daily Beast on Wednesday about the criticism Douglas received over her slicked-back ponytail. “You have this young girl doing amazing things, and the conversation becomes about her hair? It was ridiculous and shameful.”

Gibson, who also lends his talents on What Not to Wear, worked his mane magic on the Virginia Beach native and gave her a hair makeover that the teen couldn’t stop gushing about: frizz-free, center-parted waves that fall a few inches below her shoulders.

“Ted Gibson Is AWESOME!!! LOVE HIM SOO MUCH!!!,” Gabby tweeted on Tuesday. “A special thank you to my Gold Medal Celebrity Hair Stylist!”

“I’m excited because she’s so young and I have a chance for input in the brand of Gabby,” the hair pro mused to The Daily Beast. “There are so many opportunities for someone like her to shine, and I get to be part of that on the ground floor. It’s pretty cool.”

Gibson may not be my favorite when it comes to styling African American hair, but he is definitely a professional in his craft, known for his perfect cuts and seamless weaves. He was brought on by Gabby and her team to make a difference, and I wish her nothing but the best.

“It’s tricky because Gabby is 16 and I don’t want to do anything to make her look 25 years old,’’ says Gibson. “Together with her vision, I hope we can create something that’s easy and looks great no matter what she’s doing or where she is. I hope to create something that makes her feel good about herself as well. That’s so important and a big part of what I do for all the women I work with.”

Douglas faired poorly in her later performances at the Olympics and even fell during her balance-beam routine before the games ended. Gibson says he believes the teenager was completely overwhelmed by the negative press about her appearance and, as a result, lost the concentration she needed to win again.

“I believe all that talk had to take a toll on her,’’ he says. “How could it not? You’ve worked so hard for something and then people tear you apart for little or nothing. My job in working with all women from all walks of life is to not only to give them this amazing look but to also work with them to feel good about being in their own skin. Women know coming to me is a soothing and nurturing experience that compliments the styles I give them. It’s about the hair, and then it’s about much more.”