GUTTER RATS: How Ugly Are These Women? (You Be The Judge) 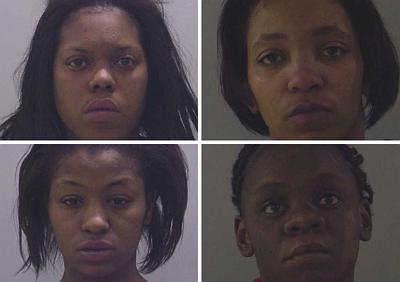 Four women who allegedly killed a man on the South Side for “disrespecting” them by throwing a beer bottle were ordered held without bond today for the weekend murder.

Although Assistant State‚s Attorney LuAnn Snow wouldn’t say what prompted the fight, a source close to the investigation says an argument escalated over a broken cigarette.

Wilson, 30, was asked to leave Cox’s apartment in the 8200 block of South Drexel Avenue and, as he walked out the door, he allegedly threw a beer bottle at it, Snow said. Nelson, who felt Wilson “disrespected” the women through his actions, told the others they “need to beat him up” and promptly went to the kitchen to grab a knife, Snow said.

The women left Cox’s apartment and found Wilson a few blocks away in the center of a courtyard apartment, in the 8100 block of South Drexel Avenue. There, Nelson stabbed Wilson before passing the knife to Hall, who repeatedly plunged the knife into him as the others kicked, punched and stomped on him, Snow said.

Wilson, of the 500 block of East 80th Street, staggered to the door of the apartment building when the women were diverted by neighbors, but the four soon continued their attack, Snow said.

Hall stabbed Wilson a few more times and Nelson then yelled that Wilson might have some money on him, Snow said. The women, according to Snow, then dug through the man’s pockets and took his coat. It appeared as if Wilson was stabbed more than 20 times, according to a source.

A woman who witnessed the incident with a few neighbors said she saw the female suspects leaving, “yelling and cursing” and Cox even grabbed her by the coat and snapped, “What’s up?” Snow said.

Officers later followed a trail of blood leading to Cox’s apartment, Snow said. Cox told the police she was there alone with her child, but officers found the other three women heading out the back door, Snow said.

Hall later told a doctor a she received stab wounds on her hand because she used a broken knife and made a “stabbing motion,” Snow said. However, she later told police she got the wounds from cutting a piece of fruit.

Cox admitted to detectives she stomped on Wilson’s head, Nelson told them she stabbed Wilson once and took his coat and Ball said she kicked him, Snow said.