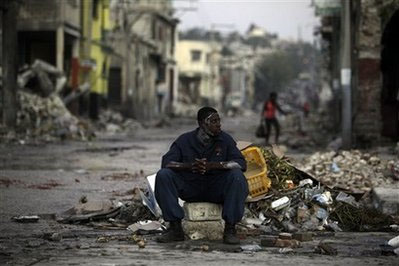 With the first heavy rains since the Haiti earthquake quickly approaching, relief officials are displaying what appears to be stress, and delaying plans to build big refugee camps outside the capital. They are telling the homeless to pack up their tents and tarps and return to destroyed neighborhoods.

Gerald-Emile Brun, an architect with the government's reconstruction committee suggested that Haitians, who expect little of their corrupt and inefficient government, may largely be left to sort it out themselves.

Haitian President Rene Preval has stated in the past that it would take 1,000 trucks and 1,000 days (more than three years) to rebuild Port-au-Prince.  Brun said the government has about 250 trucks and can probably find another 250 in the private sector.

U.S. Air Force Lt. Col., who is involved in coordinating the plan says officials haven't even decided who will do the demolition and rubble removal. Could U.S. Army engineers be dispatched to do it? “I don't see it,” Blackwell said.