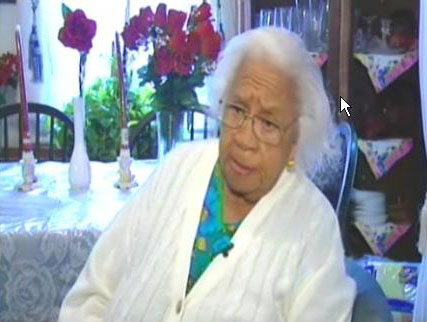 Virginia elections officials say nine of out ten newly-registered voters will be voting for the first time this November.

Not all of them are young people, 95-year-old Florence Washington is just as excited.

She became eligible to vote when Franklin Roosevelt and Herbert Hoover battled it out for the White House, but it took the candidacy of Sen. Barack Obama to get her on the voter rolls.

“He looks like he's for blacks and white and that's why I like him. He's not for the white particular and not for the black particular. He said we are all one and that he means it. And I believe he means it,” she said.

Her daughter says she tried to get Florence registered before and it's excited the whole family.

“I think it's wonderful. I am happy. I am glad that she is going to do it for the first time. It's exciting,” said granddaughter Sherry Benbow.

“I am going to vote if I can, if nothing happens to me between now and that time,” Washington said.

Washington says every eligible American should register to vote. She also said you should vote for who you want to vote for!

The close of business on October 6 is the last day to register for the November election.