Honeydripper: Drenched In The Blues 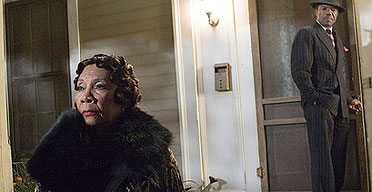 It was Mable John who, with Smokey Robinson, told Berry Gordy Jr back in 1959 that it was time to stop schlepping his tapes around major record companies and start a label of his own. This was during a trip to New York, and when they were all back home, John used her boyfriend's car to drive the future president of Motown records to meetings with disc jockeys and record store proprietors in the Detroit area.

“Berry didn't know how to drive and he didn't have a car,” she says now of the man who gave the Motor City a new claim to fame. Later she would become one of only two artists – the other being Kim Weston – to record for both Motown and Stax, the twin pillars of 1960s soul music.

Forty years after that heyday, Mable John is enjoying a new kind of fame. When the director John Sayles came to cast the part of Bertha Mae, a veteran blues singer who embodies the spirit of the past in his new film, Honeydripper, he chose a woman who has never commanded the acclaim granted to her friends Aretha Franklin, Gladys Knight and Mavis Staples, but whose own life represents a precis of the history of African-American music in the 20th century.