It's A “Wrap” for Prince, the N.J. Pimp who Enslaved Prostitutes 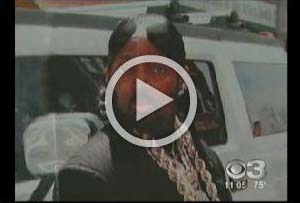 A state grand jury has indicted an alleged international pimp, Allen Brown aka Prince with running a human trafficking and prostitution ring in Jersey City in which scores of women were induced to use heroin and cocaine.

The coldest part about this story is that he's been under investigation and untouchable for 19 long years, and now, after almost two decades, not only has he been charged, but 7 others including the madam?, his 72 year old mama. Yes ma'am.

Brown, who was living in the Society Hill development when arrested, had allegedly brought women from Camden, Atlantic City, Elizabeth, Newark and Philadelphia.  He was indicted on first-degree charges of human trafficking, racketeering, and money laundering as well as other charges that carry stiff penalties.

At the time of his arrest, authorities said the prostitutes worked on Tonnelle Avenue and had to pay $500 on a weeknight and $1,000 on a weekend night to get back into the Society Hill residence.

Once inside, they were strip-searched and they had access to heroin, food, clothing and shelter.  However, if any of the girls came up short, they were beaten and locked inside the house with no access to the outside world.  Authorities add that up to 10 women at a time were housed at the residence.

“This is a shocking case of human trafficking,” Milgram said at a Trenton press conference. “We charge that Allen Brown enslaved vulnerable young women in a living hell of addiction and prostitution, controlling them with narcotics, threats and beatings. We will prosecute him to the full extent of the law.”