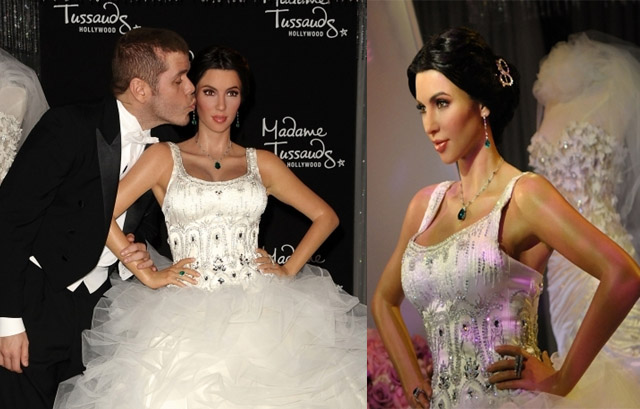 Kim Kardashian’s big day finally came today (Aug. 20), as she wed the love of her life, NBA baller, Kris Humphries. Photos have not yet been released, but if you’re wondering how Kim looked in her custom designed Vera Wang wedding dress, Madame Tussauds unveiled a wax figure on August 18, 2011 in Hollywood, CA. to give the world an idea.

Earlier today, La La Vasquez tweeted butterflies, while headed to her friend’s special occasion. “Butterflies in my stomach for @KimKardashian & @Krishumphries…beyond excited for today! the Anthonys are on our way! Love is in the Air!,” she said.

Kim and Kris’ wedding was held at a private estate in Montecito, California, where they were surrounded by friends and family. Exclusive photos, interviews, and details from inside the wedding were obtained by PEOPLE magazine for $1.5 million, and will appear in the Sept. 5 issue of the magazine, which hits newsstands nationwide on Friday, August 26.

Exclusive video from inside the wedding will be featured in a special early edition of E! News on Sunday, August 21 at 6:00pm ET/PT. In addition, every detail – from the lavish wedding planning to the star-studded parties – will be featured in a two-part special, “Kim’s Fairytale Wedding: A Kardashian Event,” which premieres Sunday, October 9 and Monday, October 10 only on E!

UPDATED WITH AN E-SNEAK PEAK AND A FEW LEAKED PHOTOS: