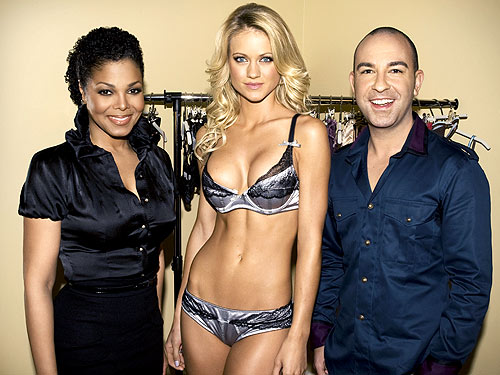 A couple of months back at the Versace show in Milan Janet announced that she would be coming out with a new lingerie line but remained coy about specific details, she did tell reporters: “I’m working on it.” Apparently she was working faster than we thought since her lingerie is now available for pre-order. Let’s just hope the line doesn’t create any new pages in the dictionary for design malfunction. 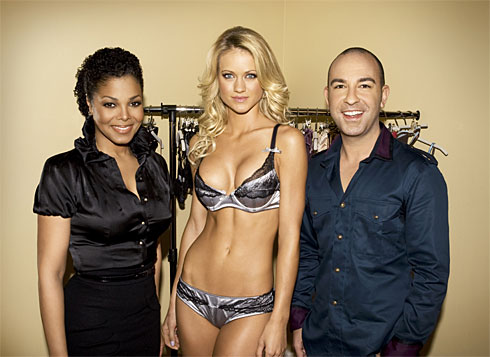 Jackson’s Pleasure Principle line of lingerie will hit mass retailers in November. After making its debut in the USA, the label will arrive in Australia, Japan and Europe. Jackson teamed up with Australian designer Bruno Schiavi for the project.

“People have come to me with other ideas, but lingerie is a passion for me, and just like music and acting, I can’t do it unless I put 100% into it,” Jackson, clad in a Roland Mouret dress and Christian Dior shoes, said at a press event to announce the collaboration.

Named after Jackson’s 1987 hit, the collection, all priced under $40,
includes a variety of bra styles (demi cups to full coverage), with sizes from 32A to 44G. The first collection features Chantilly lace, satin and feminine details such as bows. Rich color combinations include burgundy and beige, silve
r and peach, and classic black and white.

“There’s something for every woman, and that’s very important to us,” Jackson says. “I’ve always hated when lingerie is uncomfortable, so the fit and comfort was key.”

The singer says she was hands-on during designing and sometimes worked on the line at 4 a.m. “I really enjoyed the entire process,” she says.

In addition to designing, Jackson has spent the summer rehearsing for her Rock Witchu tour, which kicks off Sept. 10 in Vancouver, B.C. She’s also at work on a book chronicling her struggles with weight and food, to be released next year. “What is downtime?” Jackson asked with a laugh. “Any time I have to myself will be spent sleeping.”

The Pleasure Principle collection is available for pre-order at jupicorp.com.