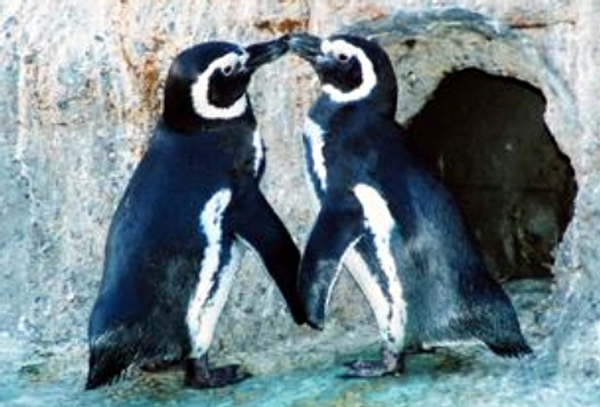 The question has come up before: If you knew that a man was gay, would you still date him?

Well, apparently Linda doesn't care if a man is gay or not just as long as she can say she has one of her own.

TRUE STORY: Everyone who works at the San Francisco Zoo knows about Harry and Pepper, two male Magellanic penguins who share a burrow on Penguin Island.

They have been cohabitating for six years, even hatching a surrogate chick together and raising it as two proud gay daddies. They show all the behaviors of a heterosexual penguin couple – building a nest together, preening each others' feathers and love-tapping beaks. They just happen to be the only two dude penguins with the same address on Penguin Island.

All was domestic bliss until their next-door neighbor Fig died, widowing his mate, Linda.

Harry's curiosity obviously got the best of him when he boldly walked next door and bunked down with Linda back in March, just in time for breeding season. They built a nest together, and Linda laid two eggs for him.

Pepper (while losing his mind) ventured in their burrow a few times in the three weeks after the breakup, prompting a temporary monthlong trip to the Avian Conservation Center on zoo grounds to chill out. A few other bachelor penguins, which were also looking for love and causing trouble, were sent to the center to calm down. No sparks flew between Pepper and the exiled bachelors, but the vacation seemed to help get Harry out of his system.

“We're all curious to see who Pepper turns his attention to next,” Edell said. “We have more males than females on the island, so there's that possibility – and we also have some younger females who need to mature before he will find them interesting. We just don't know which way he's going to go.”

But if he's truly a homosexual animal, he isn't the only one at the San Francisco Zoo. Edell said zookeepers have seen the apes and the chimpanzees same-sex canoodling, and there's a lesbian black swan couple who have been laying eggs together in the same nest for several years.

Edell is getting quite a lot of e-mail from people who are outraged that Harry and Pepper split up.

“People think we separated them on purpose,” Edell said. “There's no explaining love.”