Photos shown of the parents who were spoiled with gifts that were given on Mother's Day with money that was stolen during what is said to be the largest armored car robbery in U.S. history.  The parents are breaking down after the judge passed out sentences like there was no tomorrow.

Six young men who are said to have staged one of the largest armored car heists in U.S. history, have wasted their lives for a 1 week shopping splurge on strippers, tennis shoes, tattoos, electronics, used cars, and Mother's Day gifts.

According to the New York Daily News, the men – four of whom were college students at the time of the holdup – will learn their punishment for the $9.8 million robbery and the beating of a guard who was left bloodied and bound on a secluded road beside a strawberry patch in Columbia in 2007.

While prosecutors have asked a judge to sentence all but one of the men to at least 25 years, relatives and defense attorneys insist they are not scheming criminals, just misguided youth.

“He's a person that – once he recognizes he's made a mistake – he makes a change in his life,” Gail McPhail, the mother of one of the men, said during a hearing earlier this month. “I believe he has greatness in him.”

It's always hard for a parent to accept the fact that their child has done wrong to the point their lives are at stake – especially when the crime they've committed is one that can't be understood – under the circumstance that the child just wasn't raised that way.

Family members say many of the men once volunteered in their communities, helped raise their siblings and aspired to be college graduates despite growing up in rough neighborhoods. One was a college athlete, another a sensitive father who turned to cocaine and alcohol after ending his relationship with the mother of his young daughter.

“He made a mistake,” the father of one of the one young men said. “They all made mistakes. … But take me, please don't take my son. Don't take him away from his daughter.”

The crime was sloppy and the cover-up quickly discovered. The men didn't even bring enough garbage bags to haul away all the $18 million in the armored car, defense attorneys said. More than half of the money they stole remains missing.

Two of the six men, Domonique D. Blakney, 21, and his brother, 22-year-old Kelby D. Blakney have already been sentenced, but are asking a judge to reduce their prison terms from 25 years. Prosecutors have asked that their request be denied.

“This isn't two guys that knocked over granddad's liquor store — there's a lot more to it than that,” prosecutor Dan Goldberg said. “It was a well-thought out, calculated plan. Each person involved had their own role. They had their own job and they executed them. … And there was a far reaching impact as a result of their actions.” 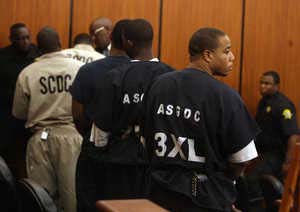 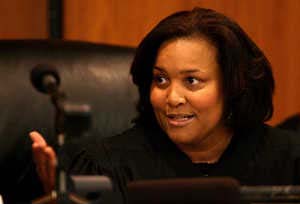 Darryl Frierson, 21, and the partner of the Express Teller Armored Car Services driver, to 35 years for planning the attack.

Dominic La Shaun Lyde, 24, of Darlington, to 28 years. Authorities say Lyde, who was featured on “America’s Most Wanted” and captured after a nine-month manhunt, assaulted Jones with a gun.

Paul J. Whitaker, 23, of Sumter, to three years. Authorities said Whitaker, also an Express Teller Services employee, stayed at the office to file a false security check on the truck.