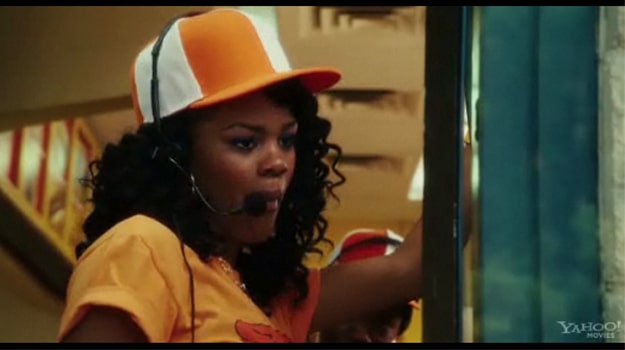 Tyler Perry films may not be a favorite for many, but one thing is for certain, many of his films are based on truth.

In March of 2009, a Florida woman called 911 three times because the McDonald’s location she visited were out of nuggets. In Dec. 2009, a Kansas City woman became upset when McDonald’s staff couldn’t get her order right. After returning it twice to be corrected with no success, she demanded her money back. When employees wouldn’t give her money back, she began to trash the place (watch video footage here).

In Jan. 2010, Melodi Dushane was so frustrated that she couldn’t order chicken nuggets, because the restaurant was serving breakfast, that she attacked the drive-thru staff member (watch the attack here).

Above are just a few examples of how some people become outraged when something goes wrong with their food orders. Tyler Perry as Madea is no different.

In one of Perry’s upcoming films, “Madea’s Big Happy Family,” there’s a scene where Madea pulls up to a drive-thru window and asks for a ham, egg, and cheese biscuit. When the fast food worker, played by Teyana Taylor, claims the restaurant was out of ham, Madea drives her car right through the front entrance, gets out of the car, and begins to trash the place.

Watch The Official Trailer for “Madeas Big Happy Family” Below: