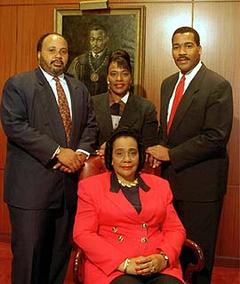 Two of Martin Luther King Jr.'s children have filed a lawsuit against a third, embroiling the family in a legal dispute over the estate of the civil rights icon.

Bernice King and Martin Luther King III filed a lawsuit Thursday in county court to force Dexter King to open the books of their father's estate.

The lawsuit claims that Dexter King, the estate's administrator, is refusing to provide his two siblings with documents concerning the estate's operations. That includes financial records, contracts and other documents, the lawsuit said.

Jock Smith, an attorney who plans to represent the elder siblings in the case, said Friday that the decision to sue their brother was not an easy one.

“This was very heartfelt on their part and very, very taxing on them to have to do this,” Smith said. “They are not happy that they had to bring this action. All they're asking for is … to be included in their daddy's legacy.”

Dexter King has 30 days to respond to the lawsuit. In a statement released on Friday by The King Center, he called the lawsuit unfortunate.

“I'm disappointed that our personal family disagreement, as it relates to the family business, has evolved into being handled in a public legal forum,” the statement said. “It is my hope that this inappropriate and false claim by my siblings will be swiftly resolved and we can go about the business of focusing on our parents' tremendous legacy.”

Dexter King is also chief executive officer of The King Center and chairman of its board of directors.

The lawsuit claims that Dexter King and the estate “converted substantial funds from the estate's financial account … for their own use” on June 20 without notifying his siblings.

The lawsuit also claims that Dexter King may have taken assets from the firm “for his own benefit” and that the assets may have been “misapplied or wasted.”

Two years ago, King's estate, which controls the civil rights leader's image, sold a collection of more than 10,000 of his personal papers and books in 2006 for $32 million. The move came in an eleventh hour coup, led by Atlanta Mayor Shirley Franklin, that avoided a public auction at Sotheby's in New York City.

The collection will likely anchor Atlanta's proposed civil rights museum, and is currently being archived at the Woodruff Library on the campus of the Atlanta University Center. Morehouse College, where Martin Luther King Jr. graduated in 1948, is the custodian of the documents.

Dexter Scott King Responds to Lawsuit by saying he is “SHOCKED”

“It totally blindsided me. I think maybe it was a reckless attempt to express their grievances. They are false claims and I will address that accordingly,” King said in a brief interview at his Malibu home a few blocks from the Pacific Ocean in an exclusive community west of Los Angeles.

“We are private family,” King said. “It is a private business matter, you know, a family dispute, if you will. It's probably blown out of proportion, but until I've had a chance to thoroughly review the complaint, it's just kind of difficult for me to address it.”

Back in Atlanta, Juanita Abernathy winced when she picked up her Saturday morning newspaper and read that the children of Martin Luther King, Jr. were suing each other over money.

“It tugs at the heartstrings, because I know that their parents would not want this,” said Abernathy, the wife of the late Ralph David Abernathy, King's closest confidant. “They taught their children to get along.”