The KBLX 13th Annual Stone Soul Picnic was held on May 30, 2010 and turned out to be a huge success. The crowd filled up the Sleep Train Pavillion in Concord, CA to the maximum jam-packed capacity.

With the crowd being so huge, and the heat from the sun causing a settling group of irritable individuals to make a few adjustments to their look and feel for the day, I'm certain for the majority, the group Head of State went completely unnoticed. I question if they were even there? (Updated to say Head of State is the new age New Edition) woW

In any case, the group Mint Condition wasn't a complete disappointment, but they really didn't deliver like they could have, and as a result the crowd didn't seem to be too moved by their performance. I know I surely wasn't.

“Turn that shit down, it's too loud… It's too damn hot out here for that bull-shit,” yelled a good friend that sat right next to me on the over-crowded lawn in response to the music being performed by the group.

Next up was Head of State: Bobby Brown, Ralph Tresvant and Johnny Gill. They came out looking right in all white, and they put on a great performance, singing many of their hits from the 80's when the old “New Edition” was all the rage.

Although I don't recall Charlie Wilson ever having a proper introduction, he was definitely the highlight of the show. By the time he got good into his performance, I had managed to wander away from the crowded lawn for a while and landed a seat in row 4 across from the stage where Uncle Charlie had the crowd hype singing and dancing to his music. 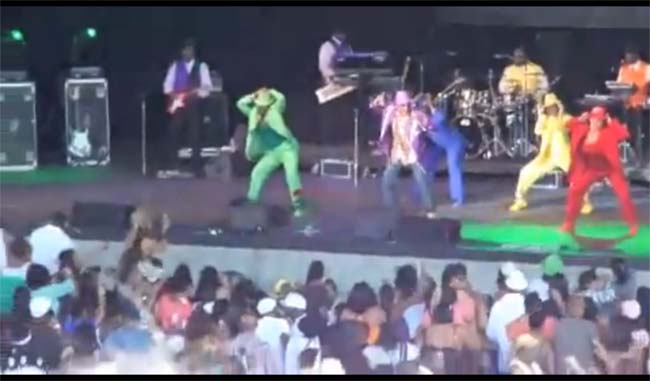 It was Sunday afternoon, and being a cancer survivor, and clean and sober after suffering a cocaine addiction for more than 20 years, Charlie took some time out and preached the blues for a minute, giving all praise to God, before singing one of his greatest hits, “Outstanding.”

Charlie Wilson Outstanding uploaded by soulfulbeauy.com
Charlie Wilson also gave a shoutout to his hat collection, “Uncle Charlie” fedora hats, in which he said was designed by him personally. The signature hats are available for purchase online with a portion of the proceeds being donated to the Prostate Cancer Foundation.
Last up from the line-up was the legendary R&B singer Ronald Isley a.k.a. Mr. Biggs. The 63-year-old crooner, known for his bedroom music, gracefully returned to the stage after spending three years behind bars for tax related issues. Mr. Biggs winded the crowd down singing some of his classic hits including “Down Low” and many others.

Although some expected a lot more from Ron Isley, who was the main act, I thought he did a pretty good job and ended the show seemingly leaving the majority with the feeling that the day was very well spent.