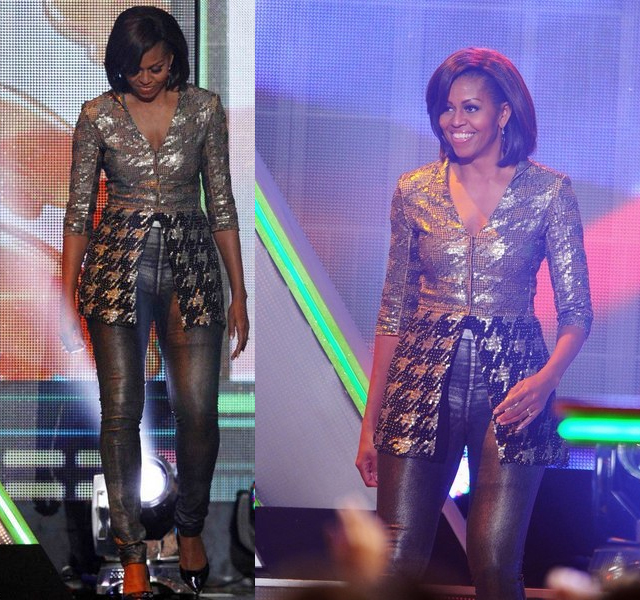 It’s true, Michelle Obama doesn’t dress like an ordinary First Lady of the President of The United States, but we already established that fact a long time ago. So, why are people still complaining that she looks really good?

“That is entirely too much FLOTUS crotch,” said fashion bloggers Tom + Lorenzo, in view of Mrs. O wearing a pair of form fitting jeans, which she paired with a high waist cut sequin top by designer Wes Gordon.

If you thought that was a joke, what’s even more insulting are the slew of other comments several readers on this site had. One in particular pointed out how much better the outfit looks on a size 2 model, than it does on Michelle Obama, because her hips are too wide.

“I think Michelle saw how nice that outfit looked on a slim model and figured it would look equally nice on her,” he said. “Her “self-esteem” enabled her to believe it did, though with her large hips she appears to be busting out of it. I honestly don’t think she realized how unattractive she looked, because no woman would intentionally look unattractive.”

What are your thoughts? Is Michelle Obama’s outfit unfit for a First Lady of the President of The United States, or is it pretty appropriate and fashionable for a woman in her 40’s at an event with a crowd full of fashionable teenagers?