By now, the world already knows President Obama is a former pot smoker. What they may not know is that he and his circle of pot smoking friends use to call themselves the “Choom Gang.” 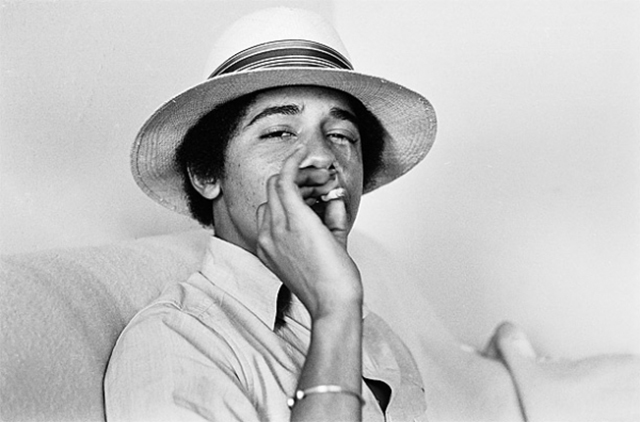 A review of Washington Post associate editor David Maraniss’ forthcoming book “Barack Obama: The Story,” reveals details how Obama spent a lot of time at the Punahou School in Hawaii with a “self-selected group of boys who loved basketball and good times and called themselves the Choom Gang. Choom is a verb, meaning “to smoke marijuana.”

“As a member of the Choom Gang,” Maraniss writes, “Barry Obama was known for starting a few pot-smoking trends.” One of those was: “Total Absorption” or “TA.” “TA was the opposite of Bill Clinton’s claim that as a Rhodes scholar at Oxford he smoked dope but never inhaled,” explains Maraniss. If you exhaled prematurely when you were with the Choom Gang, “you were assessed a penalty and your turn was skipped the next time the joint came around.”

Maraniss further states that Obama was known for his “interceptions,” which involved him elbowing his way in, out of turn when a joint was being passed around, shouting “Intercepted!” and taking an extra hit.” In addition, the author noted how Obama helped popularize a concept known as “roof hits.”

“When they were chooming in a car all the windows had to be rolled up so no smoke blew out and went to waste; when the pot was gone, they tilted their heads back and sucked in the last bit of smoke from the ceiling.”

Although “most members of the Choom Gang” went on to successful careers as writers, lawyers and businessmen, the same could not be said about the group’s drug dealer, Ray, who was killed a scorned gay lover. Maraniss wrote that Obama acknowledged Ray in a high school yearbook, but not his own mother as the politician wrote “Thanks Tut, Gramps, Choom Gang, and Ray,” Obama wrote, “for all the good times.”

David Maraniss’ “Barack Obama: The Story,” is set to hit stores on June 19.