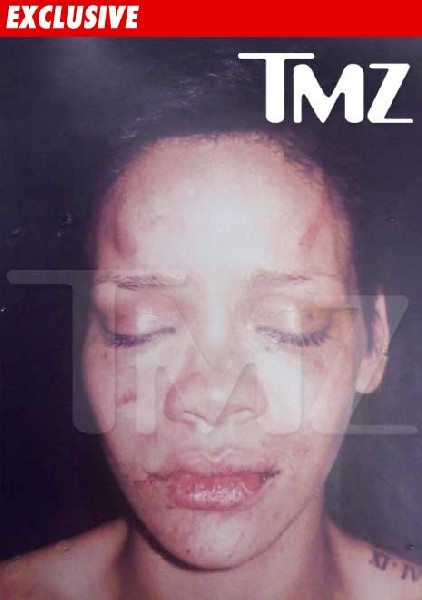 According to TMZ this is the actual picture of Rihanna's injuries exposed from the night her and Chris Brown had their altercation (OUCH).  But with so many rumors floating around and fake this and fake that, etc. I can't even half way believe this one either.  I just can not.

In any case, IF THIS IS the real deal then damn…. that's f8c8d up! HOWEVER, just from looking at this picture, the supposed two contusions on each side of her head look like one big bump to me.  Didn't her publicist originally mention something about a car accident?  I'm just saying… we still don't know ishywah.

In addition to this new photo surfacing, E!Online is also reporting that as bad as the last week has been, Chris Brown may not have even seen the half of it.

At the request of the Los Angeles District Attorney's Office, the R&B star is being investigated for a variety of felonies, including domestic violence, assault resulting in great bodily injury and based on specific allegations made by Rihanna even attempted murder, a source close to the L.A. Police Department's investigation tells E! News.

But as they build their case, the source says, prosecutors fear that making any serious felony charges stick could prove difficult in a case where there are no direct witnesses other than Rihanna and Brown.

Brown is accused of beating his longtime girlfriend in the early morning hours of Feb. 8, causing them both to cancel their scheduled Grammy performances that night.

Rihanna told police that, while the two were fighting in his rented Lamborghini, Brown said to her, “I'm going to kill you,” while his hands were around her neck. The Barbados-born songstress, who is reportedly cooperating with the cops' investigation, also told authorities that Brown choked her until she lost consciousness.

Brown was booked by police on suspicion of making criminal threats, but the D.A.'s office wanted further investigation into the incident before it decided on pressing charges.

The 19-year-old singer has been free on $50,000 bail and is currently back home with his family in Virginia.

“Words cannot begin to express how sorry and saddened I am over what transpired,” Brown, 19, said over the weekend via his rep in his first public statement since his arrest. “I am seeking the counseling of my pastor, my mother and other loved ones and I am committed, with God's help, to emerging a better person.”

Rihanna, 20, was treated after the incident at Cedars-Sinai Medical Center and was discharged the following night. After canceling her upcoming public appearances, she spent last week with her family in Babardos before departing for parts unknown.

Again, I don't know what to believe anymore, but I honestly feel bad for the both of them, because they are both so young and to be going through all of this is just a shame.  Really, WHAT THE HELL HAPPENED?