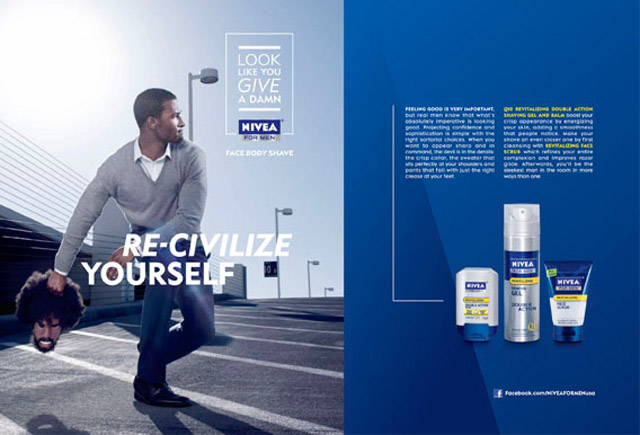 Don’t go applying for any jobs with cosmetics giant Nivea with your hair not groomed by societies standard of beauty. Why? Because, showing from the company’s latest ad campaign, which has the internet buzzing, they are sure to toss your resume across the road.

The ad, which promotes shaving products for men, portrays a clean-shaved man holding his head that was previously styled with a kinky afro, and un-shaved facial hair. The ad reads: Look Like You Give A Damn! RE-CIVILIZE YOURSELF.

Dating as far back as I can remember, African American’s were made to believe chemically straightened hair (for women), and freshly cut hair (for men), is more appropriate than natural hairstyles, when it comes to Corporate America.

Nivea’s new ad only re-enforces those stereotypes, and re-opens deep-cut wounds, which is why so many people are in an uproar right now, deaming the ads racist. At-least that’s how I see it.

It should be interesting to see how the company responds.