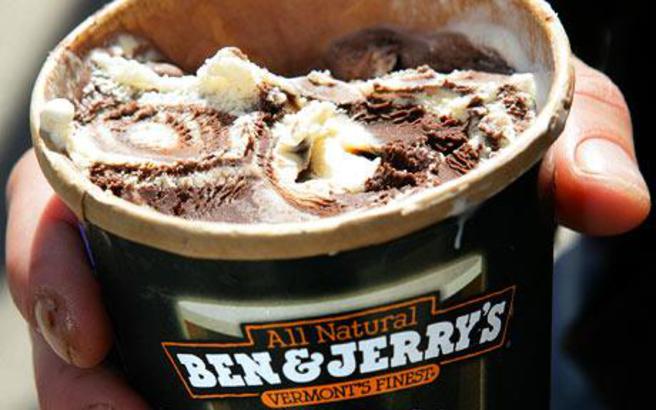 In a recent letter to Ben and Jerry, PETA requests the use of breast milk in replace of cow’s milk. WTF? Sure, why not add sperm while you’re at it.

“The fact that human adults consume huge quantities of dairy products made from milk that was meant for a baby cow just doesn’t make sense,” says PETA Executive Vice President Tracy Reiman. “Everyone knows that ‘the breast is best,’ so Ben & Jerry’s could do consumers and cows a big favor by making the switch to breast milk.”

On behalf of PETA and our more than 2 million members and supporters, I’d like to bring your attention to an innovative new idea from Switzerland that would bring a unique twist to Ben and Jerry’s.

Storchen restaurant is set to unveil a menu that includes soups, stews, and sauces made with at least 75 percent breast milk procured from human donors who are paid in exchange for their milk. If Ben and Jerry’s replaced the cow’s milk in its ice cream with breast milk, your customers-and cows-would reap the benefits.

Using cow’s milk for your ice cream is a hazard to your customer’s health. Dairy products have been linked to juvenile diabetes, allergies, constipation, obesity, and prostate and ovarian cancer. The late Dr. Benjamin Spock, America’s leading authority on child care, spoke out against feeding cow’s milk to children, saying it may play a role in anemia, allergies, and juvenile diabetes and in the long term, will set kids up for obesity and heart disease-America’s number one cause of death.

Animals will also benefit from the switch to breast milk. Like all mammals, cows only produce milk during and after pregnancy, so to be able to constantly milk them, cows are forcefully impregnated every nine months. After several years of living in filthy conditions and being forced to produce 10 times more milk than they would naturally, their exhausted bodies are turned into hamburgers or ground up for soup.

And of course, the veal industry could not survive without the dairy industry. Because male calves can’t produce milk, dairy farmers take them from their mothers immediately after birth and sell them to veal farms, where they endure 14 to17 weeks of torment chained inside a crate so small that they can’t even turn around.

The breast is best! Won’t you give cows and their babies a break and our health a boost by switching from cow’s milk to breast milk in Ben and Jerry’s ice cream? Thank you for your consideration.

“We applaud PETA’s novel approach to bringing attention to an issue, but we believe a mother’s milk is best used for her child,” said a spokesperson for Ben and Jerry’s.” source