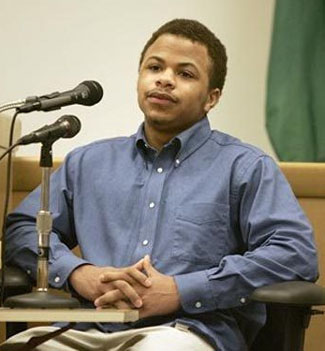 Mycah Johnson, a convicted pimp and admitted gang member sat and sang like a bird losing all his pimp focus as he testified in King County Superior Court against DeShawn “Cash Money” Clark, the man he says taught him how to pimp out young girls.

Earlier this year, Johnson entered a plea agreement with prosecutors to testify against Clark to avoid facing more serious charges. His testimony provided a rare glimpse into the way members of his West Seattle gang operated, recruited girls, and kept their prostitutes in line with insults, threats and violence.

The courtroom gallery was packed with at least two dozen of Clark's supporters, including one gang member who was arrested by King County sheriff's deputies on an outstanding warrant. A larger-than-usual contingent of plainclothes police and uniformed jail guards were also in court because of security concerns.

“To get a girl to prostitute herself, a pimp must first “sell her a dream” by confessing his love and promising her a future. But of course, he doesn't really mean it,” said Johnson.

“Most girls are insecure,” said Johnson, the 20th witness to testify against DeShawn “Cash Money” Clark, 19, an alleged member of the West Side Street Mobb who is on trial on charges that include promoting prostitution, human trafficking and promoting commercial sexual abuse of a minor.

"Do you look for girls who are insecure?” asked Senior Deputy Prosecutor Sean O'Donnell.

“To sell a girl a dream, you sweet talk her. Just say romantic things like you love her, you care for her, you'll be there for her,” Johnson said. “Then, once a girl has fallen for you, you switch it up on her,” he said. “When she gets to the point she feels she can't live without you, you stop the sweet talking and say, 'You're going to do this and this and this,' ” he testified. “And she'll do it because she loves you.”

“Is she property or is she a person?” O'Donnell asked.

The girl who Johnson pimped out made $500 on an average day and $1,000 on a good one, giving her earnings to him, he testified.

He and Clark would “drive around, go to the mall, or just hang out” while their prostitutes were off having sex with strangers for money, Johnson said. Johnson said he bought himself clothes, jewelry and cars with the money she earned.

Johnson, who is serving a 21-month sentence at an undisclosed facility outside King County, is in administrative segregation or solitary confinement to protect him from other incarcerated gang members who've made daily threats against his life because of his plea agreement, he testified…