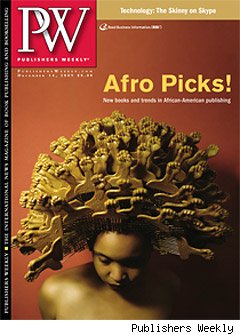 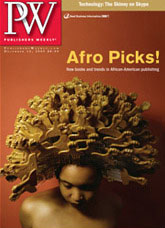 It seems everyone is taking to the micro-blogging site, Twitter, to share topics and socialize with others who have the same interests as they do. But as of late, the site has proven to be nothing more than a platform for people to voice their frustrations.

While I won’t go into detail about all the past drama episodes that have taken place on Twitter, I will address this one in particular that has me confused a bit.

Black writers from all over expressed outraged over this image of an African American woman wearing afro picks in her hair that were piled together forming a perfect ‘fro. I didn’t understand what the problem was. Analyzing at the pic, I found it to be a creative piece of work, and pleasant to look at.

As it turns out, the image was chosen as the December cover for Publishers Weekly, and had a header that read, “Afro Picks!” I still had no problem with it, because after-all that’s what they are. Right? But then the bi-line read, “New books and trends in African American publishing.” Hummmm

After reading several comments on various blogs and news sites, the problem seems to be the image has no relevance to the inside story. It also places African American writers in the “blacks only” category that many of them have been trying to steer away from. At-least that’s what I’m gathering.

I’m still sort of feeling like the whole issue was blown out of proportion a bit calling the cover racist, but I’m not in the writers shoes, so I really can’t say how they should feel. However, Publishers Weekly have since issued an apology, so that should at-least make up a little for the mistake they made in choosing a beauty image to represent black book trends. ???

At any rate, the ladies over at blogher.com can tell you better than I can what the real problem is. I’m somewhat stuck in a loop hole on this one, because for the most part I can’t decipher the real reason why “some people” actually find it so disturbing.