Rewarding Voters With Goodies May Constitute a Felony 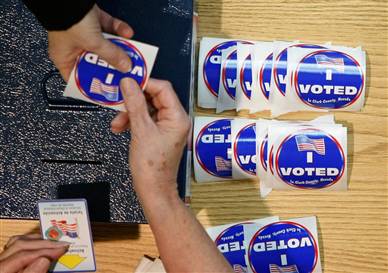 According to the Washington Post businesses that hope to reward voters today for exercising their patriotic right might be committing a felony.

A number of companies, including Starbucks, Ben & Jerry's and California Tortilla, said they would give out free food and sweets today to customers displaying an “I Voted” sticker.

But such freebies might be a violation of election laws — they could be viewed as bribes even after a vote has been cast.

Leave it to the law to spoil all the fun.

n Georgia, the secretary of state's office issued a statement yesterday reading: “Businesses are free to offer 'Election Day' specials or sales for all of its customers, but gifts, incentives or specials just for voters is prohibited under this provision.”

Which is good news for the cheap, hungry and disenfranchised of the Peach State.

To comply with similar election laws nationwide, businesses have devised a work-around.

For instance, Krispy Kreme has tied its voting promotion to its famous “Hot Doughnuts Now” signs that glow in store windows when the circular treats roll off the assembly line, freshly bathed in warm glaze.

“Anyone who visits a participating Krispy Kreme shop today and simply mentions our 'Hot Vote Now' promotion will get a free doughnut,” company spokesman Brian Little wrote in an e-mail today. “No one is required to show an 'I Voted' sticker.” The stores in Alexandria and the District's Dupont Circle locations are participating in the promotion today.

Ben & Jerry's said it would give away a free scoop of ice cream from 5 to 8 p.m. today to customers displaying the sticker, but then learned about the law.

“Originally, we planned to give free scoops away just to those who voted,” said Walt Freese, chief euphoria officer of the wacky Vermont ice cream maker. “We found out afterwards that certain laws may not allow it. So instead we're celebrating our election with a national party,” he said.

At Starbucks, which promised a free “tall” coffee today to anyone displaying the “I Voted” sticker, free joe now flows for all, voter and non-voter alike.

“To ensure we are in compliance with election law, we are extending our offer to all customers who request a tall brewed coffee,” Starbucks spokeswoman Diana Fullerton wrote in an e-mail. “We're pleased to honor our commitment to communities on this important election day.”

So today's lesson is: Vote or don't vote — either way you get free food. Probably not quite the message the companies had hoped to impart.