Ron Finley, A Gangsta Gardener Ready To Change The Community and Its Soil

Ron Finley, a successful clothing designer and artist from Los Angeles is tired of the high obesity rate among the people in his South Central LA community. He looked around and realized part of the problem was the area being filled with liquor stores, fast food, and vacant lots, but there was nowhere to buy fresh produce. His vision was to help change that, so, he planted a food garden along the sidewalk in his community. “To change the community, you have to change the composition of the soil. We are the soil,” said Finley during a segment of his Ted Talks show appearance. 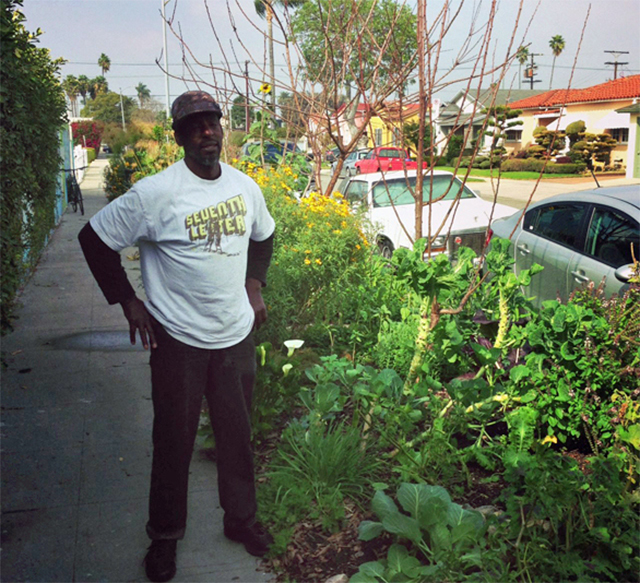 Finley is not afraid of people stealing food from the garden. He realizes that people in his community are hungry, and he doesn't want them to feel ashamed to eat.

Finley's goal is to make gardening more gangster and offer youth in the community gainful employment, and get them off the street. He emphasizes that “growing your own food, is like printing your own money.”

“We gotta make this sexy,” he said. “…I want us all to become evolutionary, renegades, gangstas (gangsta gardeners). We gotta flip the script of what a gangsta is. If you aint a gardener, you aint gangsta. Get gangsta with your shovel. Ok. And let that be your weapon of choice….”

Don't call me if all you want to do is talk, says Finley. “If you wanna meet with me, come to the garden, with your shovel, so we can plant some shi@.”

To learn more about Ron Finley, visit him at http://ronfinley.com