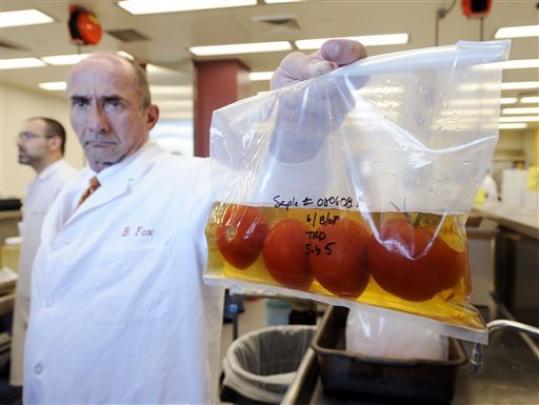 The number of people sickened in the ongoing salmonella outbreak has now surpassed 1,000, and while certain types of tomatoes remain the suspected cause, U.S. health officials on Wednesday added hot peppers and cilantro as potential suspects as well.

Related News”We continue to get new reported cases every day,” Dr. Robert Tauxe, deputy director of the division of foodborne, bacterial and mycotic diseases at the U.S. Centers for Disease Control and Prevention, said at a late-afternoon teleconference. “This is the largest food-borne outbreak in the United States.”

Since the outbreak began in April, 1,017 people in 41 states, the District of Columbia and Canada have fallen ill, and at least 203 people have been hospitalized. One death — a Texas man in his 80s — has been associated with the outbreak. Also, a man in his 60s who died in Texas from cancer had a Salmonella Saintpaul infection at the time of his death, the CDC reported Wednesday on its Web site.

In addition, according to the CDC, 300 of those people became ill after June 1.

An initial investigation of the outbreak, in New Mexico and Texas, suggested raw tomatoes as the likely source of the contamination. But a larger, nationwide study comparing persons who were ill in June found that those who were sickened were likely to have recently eaten raw tomatoes, as well as fresh jalapeno and serrano peppers, and fresh cilantro. These foods are typically consumed together, the CDC said.

However, “at this we have not found any samples of tomatoes or peppers positive for Salmonella Saintpaul,” Steve Sundlof, director of the U.S. Food and Drug Administration's Center for Food Safety and Applied Nutrition, told reporters at the teleconference.

Tauxe added, “Neither tomatoes nor jalapenos explain the entire outbreak at this point. We're presuming that both of them cause illness.”