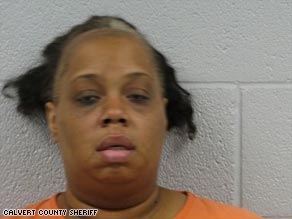 First The Preachers Wife found frozen in the freezer 3 years later and now this? I can't decide which is worse.

A bruised and starving 7-year-old girl walking alone on a gravel road led investigators to an even grimmer discovery: remains in a basement freezer that her adoptive mother said were the youngster's sisters.

Renee Bowman, 43, told police the bodies of two of her children were in the freezer since February.

Authorities said Monday they believe the mother, Renee Bowman, is responsible for killing her other two daughters. The three girls were foster children in Bowman's care before she adopted them.

Sheriff's deputies were investigating an abuse complaint Saturday when they discovered the child-sized remains encased in ice. The mother told investigators they had been in her southern Maryland home's freezer for at least seven months and police said they are considering the case a homicide.

Autopsies would need to be completed before authorities know for sure whether it is the girls, who would be 9 and 11.

Deputies made the gruesome find in Lusby, about 50 miles southeast of Washington, D.C. They were at the home with a search warrant to investigate what happened to a runaway 7-year-old girl who was found wandering the neighborhood, injured and hungry in a blood- and feces-soaked nightshirt.

Bowman, 43, has been arrested, and a judge ordered her held without bond. She is charged with first-degree child abuse in the beating of the 7-year-old.

“I asked if she was OK. She said no,” said neighbor Phillip Garrett, who found the girl walking down the street. “She said, 'My mother beats me to death all the time.”'

She escaped from a locked bedroom by jumping out a second-story window, and Bowman admitted beating her with a “hard-heeled shoe,” officials said.

Bowman told detectives she brought the remains of her other daughters with her when she moved in February from Rockville, about 60 miles away. Montgomery County Police said they are investigating whether the deaths took place in Rockville and that detectives are trying to pin down when the older girls were last seen alive. Bowman has not been charged in the deaths.

The medical examiner's office in Baltimore planned to examine the freezer and its contents, but it was unclear how long it would take for the remains to thaw sufficiently.