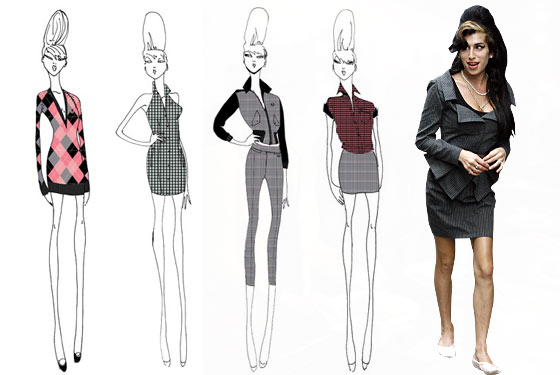 Some things never cease to scream amazing. Recovering drug addict Amy Winehouse and her famous beehive has teamed up with designer, Fred Perry for a new stylish fashion collection. The line is scheduled to hit stores in October, and is contracted to go for four seasons. Wholesale prices range from $32 to $150. Fred Perry’s marketing director, Richard Martin, spoke to WWD at length about the collection, but WiHo isn’t quoted in the story at all. Did she have anything to do with the clothes? If she didn’t, it wouldn’t be great big news in the world of celebrity designers, whose creative process usually mostly involves telling real designers something like, “This ashtray inspired me. Go make my line now.” But they normally pretend like they were heavily involved. Apparently Amy went to three meetings:

We had three major design meetings where she was closely involved in product style selection and the application of fabric, color and styling details,” said Martin. He added that pieces such as gingham shirts and the Heritage jacket, another label classic, are the foundation of the lineup. On those items, ‘Amy gave crucial input on proportion, color and fit,’ Martin said. “The range clearly has Amy’s handwriting.