Spousal Abuse: Man Fattens His Wife Up for Fear of Losing Her! 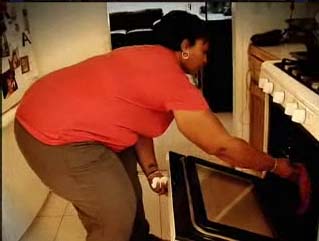 On a recent episode of Dr. Phil (see video clip here), a guest shares her frustration over how her husband will not allow her to lose weight for fear someone else will want her.

When Kim and Clint prepare for the holidays, food is the main focus. “The holidays – Clint says no diets, no workouts. It’s all about eating what he wants,” Kim says. “Every holiday, Clint says, ‘Bring out your fat clothes,’ and I say, ‘We are wearing our fat clothes.'”

Kim, who use to be a size 8 says, “I know I can say no to the food, but I wouldn’t want to, because my husband would probably have real issues.”

“If she’s turning heads now, could you imagine if she dropped some pounds?” Clint asks. “I’m a jealous guy, and there’s a lot of guys out there who don’t care, and they want what I have…. I know if she drops the weight, it’s going to be crazy.”
“He says he loves the thickness, but I really think he doesn’t want anyone else to look at me,” Kim says, growing tearful. “I would rather lose weight so I can be happy with myself. It’s important to me. I need him to want what I want. I have to do it for me, so we can continue to have a strong, happy marriage and life.”

Clint agrees that his wife could lose a few pounds and he supports her decision, but also says he only wants her to lose “some” weight, not too much, and only for health purposes.

This really sounds like a form of abuse and very selfish on Clint's part. I think from here on out, if a man tries to feed you when you don't want to be fed, it should be added to the list of things to be very careful of, because it could mean he's trying to fatten you up so nobody else will want you!