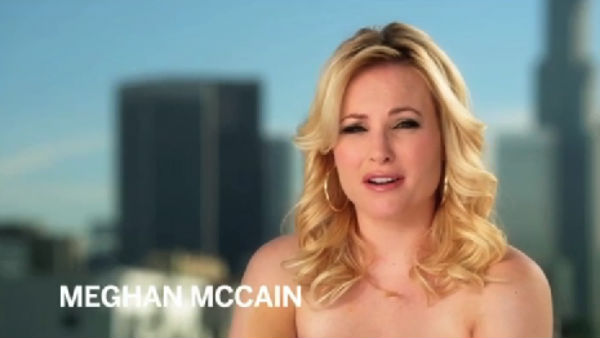 Several celebrities, including Brandy, Tatyana Ali, Meghan McCain, Tempestt Bledsoe and Danielle Fishel joined forces for the Style network’s Skin Cancer PSA titled “Naked.” The message aims to spread awareness of the disease to all skin tones, and bares the tagline: “If you leave the house without sunscreen, you might as well be naked.”

Last week when the PSA hit the net, it didn't take long for McCain critics to have a field day on Meghan appearing naked in an ad. Meghan McCain quickly defended herself by posting the following message on her Twitter page:

“Pundits in DC can calm themselves. I filmed a skin cancer PSA in a strapless juicy tube dress. All you can see is my collar bone. Both my parents have had skin cancer, everyone should be aware of the extreme dangers the sun presents and how simply using sunscreen is … a simple way to prevent skin cancer from occurring. I take it very seriously which is why I participated in the PSA.”

While Meghan's above message may have silenced the majority, Fox News talk show host Glenn Beck stood out by acting a verbal fool. Beck dedicated a portion of his Wednesday radio show to mocking the advertisement and McCain’s weight.

“Oh, I got something bad. Might be that Meghan McCain. When I look at the picture, I think to myself, I get the point, put some extra clothes on,” Beck said, suggesting that McCain wear a burqa.

CNN and TVOne political analyst Roland Martin, among others weighed in on Beck's childish tirade; some posting messages via Twitter. “If @McCainBlogette was my daughter & @GlennBeck ripped her, dude would be introduced to #teamwhipdatass quick, fast & in a hurry! I’m done,” Martin tweeted. (read more)