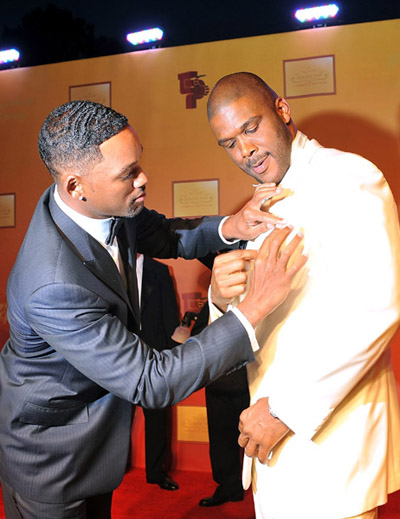 His renewed commitment to the city came after he once flirted with departing. Perry said he had considered leaving Atlanta for good after neighbors complained about noise and traffic at his old studio in a neighborhood close to downtown.

“Even though it was a studio there for 15 years, there was a lot of resistance in everything I was doing,” Perry said in a telephone interview with The Associated Press earlier in the week. “I was thinking about leaving at one point, but this is home for me.”

His new Tyler Perry Studios contains more than 200,000 square feet of studio and office space in an area that once housed Delta Air Lines' finance, reservation and computer center. It was vacant when Perry found it.

Perry, 39, said the studio features five sound stages that will be named after Quincy Jones, Sidney Poitier, Ruby Dee and Cicely Tyson — with one still unnamed. He will shoot his TBS sitcoms “House of Payne” and “Meet the Browns” along with other film projects at the studio.

Perry said he knew the new location would be an improvement. His old building was on property zoned commercial, but the street next to it is residential.

“I knew spiritually I was in the wrong place,” said Perry, whose projects include “Tyler Perry's the Family That Preys.”

“You can never be upset with the people who forced you into your dream or up higher,” he said. “They forced me out into a higher situation. It's worked out much better for me.”

Perry drew criticism from the Writers Guild of America, West, after Perry fired four writers from “House of Payne” earlier in the week. A guild spokeswoman said in an e-mail Saturday that the four, along with supporters, planned to picket Sunday morning at Perry's Atlanta home.