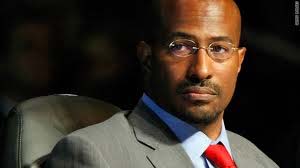 Former White House green jobs advisor, Van Jones shared his thoughts on the Shirley Sherrod scandal and how in these days of the new internet era, people have to be extremely cautious of what they say.

“I UNDERSTAND how Shirley Sherrod must have felt,” said Jones as he recalled feeling the pressure of the media when parts of his speech quickly circulated through the web. In it, Jones called the former US President George W. Bush a “crackhead,” Republicans “*ssholes,” and claimed that White Polluters” were steering poison into minority neighborhoods.

Not only was Jones accused of being a racist, he was also falsely accused of signing his name to a petition that was being passed around by 9/11 conspiracy theorists.

“Our situations aren’t exactly the same. Ms. Sherrod’s comments, in which she, a black woman, appeared to admit to racial discrimination against a white couple, were taken far out of context, while I truly did use a vulgarity. But the way we were treated is strikingly similar, and it reveals a lot about the venal nature of Washington politics in the Internet era,” said Jones.

“In the era of YouTube, Twitter and 24-hour cable news, nobody is safe. Even the lowliest staff member knows that an errant comment could wind up online, making her name synonymous with scandal,” he said.

“The victims aren’t just government employees, the public as well is hurt…. Anyone with a laptop and a flip camera can engineer a fake info-virus and inject it into the body politic…. We have to understand that no one can be defined by a single photograph, open-mike gaffe or sound bite. Not even our greatest leaders could have survived if they had to be taken to task for every poorly conceived utterance or youthful demonstration of immature political views.”